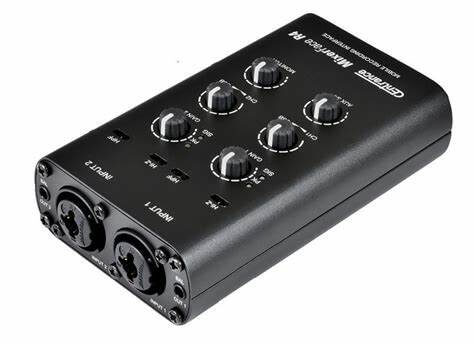 Centrance has an impeccable reputation among voice actors.  Their products are of high quality craftsmanship, and deliver the goods as promised.

Centrance first appeared on my radar (along with many others’) when they introduced their MicPortPro interface that translated an XLR mic input to a USB output.  Pre-amps were built in, and the MicPortPro was sturdy and dependable.  It became a standard item in many traveling voice actors tool kit.

The Chicago-based company recently introduced another device that took (by most accounts) 4 years to get to market, but when it premiered, it created a bit of a sensation among a dedicated bevy of techy-type Voice Actors, chief among them Beau Weaver, who I’m told, provided valuable feedback in the development of the product.

The Mixerface R4 showed the reliable Centrance quality, great preamps, rechargeable battery, and a sturdy dependable construction – but more importantly, has become the darling of those voice talent who need a hi-quality remote recording/send solution that can be used wth a smartphone.  See my previous blog on the Mixerface.

At NAB, my colleague in the ipDTL booth – Townsend Coleman – related time and again the story of how he delivered his network promo assignment using the R4, an iPhone, and an app called Luci Live.  Network producers had no idea he was anywhere else but in his home studio.  And the part he particularly relishes telling is that he did it with only one bar showing on his AT&T iPhone connectivity. (!)

Since the R4 debuted, Centrance followed with the R4R which added recording capability.  And now they’re just about to market with the R4B, which adds two pivoting mics for the two XLR inputs.  (see this page for pricing)

Michael Goodman of Centrance previewed this product for me, because as luck would have it, the Centrance booth at NAB was only about 25 feet away from the ipDTL booth.  MIchael was nice enough to do a video presentation on the spot, and you can watch it below.

I was impressed…’just wish I had purchased the R4R to begin with…Hmmm…wonder if they’ll take a trade?