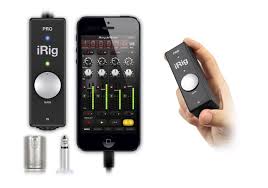 New smartphone and tablet devices are getting churned out at a dizzying pace.  Apple and Samsung lead the pack, but the new Nokia/Microsoft merge promises some surprises, while HTC and LG continue to innovate.

Because of that, 3rd-party device manufacturers are having a heyday keeping up.  Not only is that good for those of us in voice-acting seeking a new mobile solution, but it provides almost never-ending blog fodder.

I’ve written time and time again about mobile solutions.  Tascam iM2, iRig, iAudioInterface2 for iOS from StudioSixDigital, Tascam iZX, Alesis iODock,  RØDE iXY and Blue Mikey to name a few.  Within weeks the reviews are superseded by the “next best thing”.  That’s not gonna stop me.

What you don’t want to miss, though, is the iRig Pro.  Although the name and even the look are are similar to the “Pre”, the fundamental design difference explains the disparity in the price between the two.

The headphone/jack mic port has a radical “telephone filter” eq baked in, so there is no way to get broadcast quality audio through it.  I’m not sure I could tell, maybe you can’t either, but we’re not the audio engineers and producers that will be receiving demos from these portable devices, and my money is that THEY can tell the difference.  I’d prefer to have that edge, but the you’ll have to ask yourself if the $110 price difference is worth it.

Check out the iRig Pre, and the iRig Pro.  Then take a hard look at your budget.

My thanks to Dan Tucek for the tip about iRig Pro.  He notes that the only drawback to the Pro is the lack of any headphone jack for monitoring on the device.