Record On Your Android Device 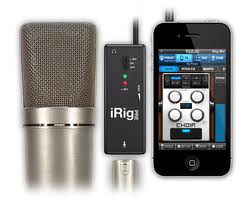 Now that Android OS phones are dominating the smartphone market, and Android OS tablets are becoming a regular fixture, it only follows that voice actors will be hoping to find ways to do a decent recording on those devices (the endless search for the perfect portable recording setup!).

A number of voice actors have told me they have successfully installed and recorded using the USB Audio Recorder Pro availabe in the Google Play store.  My good friend, and ace audio engineer Cliff Zellman sweetened the pot when he mentioned that Audio Evolution is the perfect sound editing compliment to USB Audio Recorder Pro (also works in Windows).

Sadly, this geeky blogger has not been able to get the USB Audio Recorder Pro software to work on my Motorola XOOM tablet, nor my Google Nexus 7 tablet, despite the fact that both devices are listed as compatible with the app (and believe me, I’ve TRIED with just about every configuration I could come up with).  I would encourage to you to try it though, as the app is reasonably priced, and is said to be reliable.  Maybe you’ll have better luck.  I continue to try to get this Android solution to work, and have a customer support ticket in with the folks at USB Audio Recorder Pro.

In the meantime, though, fellow Vegas Voicer Dennis Allen pointed me to the latest offerings from IK Multimedia…makers of the iRigMic for iOS that I’ve blogged about in months past.

Now, the folks at IK Multimedia have re-designed their iRig Recorder to work with Android too.

More than that, IK Multimedia also is out with their iRig Pre XLR Mic interface for iPhone, iPad, and Android.  This device not only works across device formats, but also allows you to use any standard XLR mic input to record on your tablet or smartphone.  A smart move!

I have not had a chance to evaluate the new iRig offerings, but you know I will.  My iRig Pre XLR is already on order, and when I get it in, I’ll give a whirl in a comparison sound recording.

Have a great Monday!