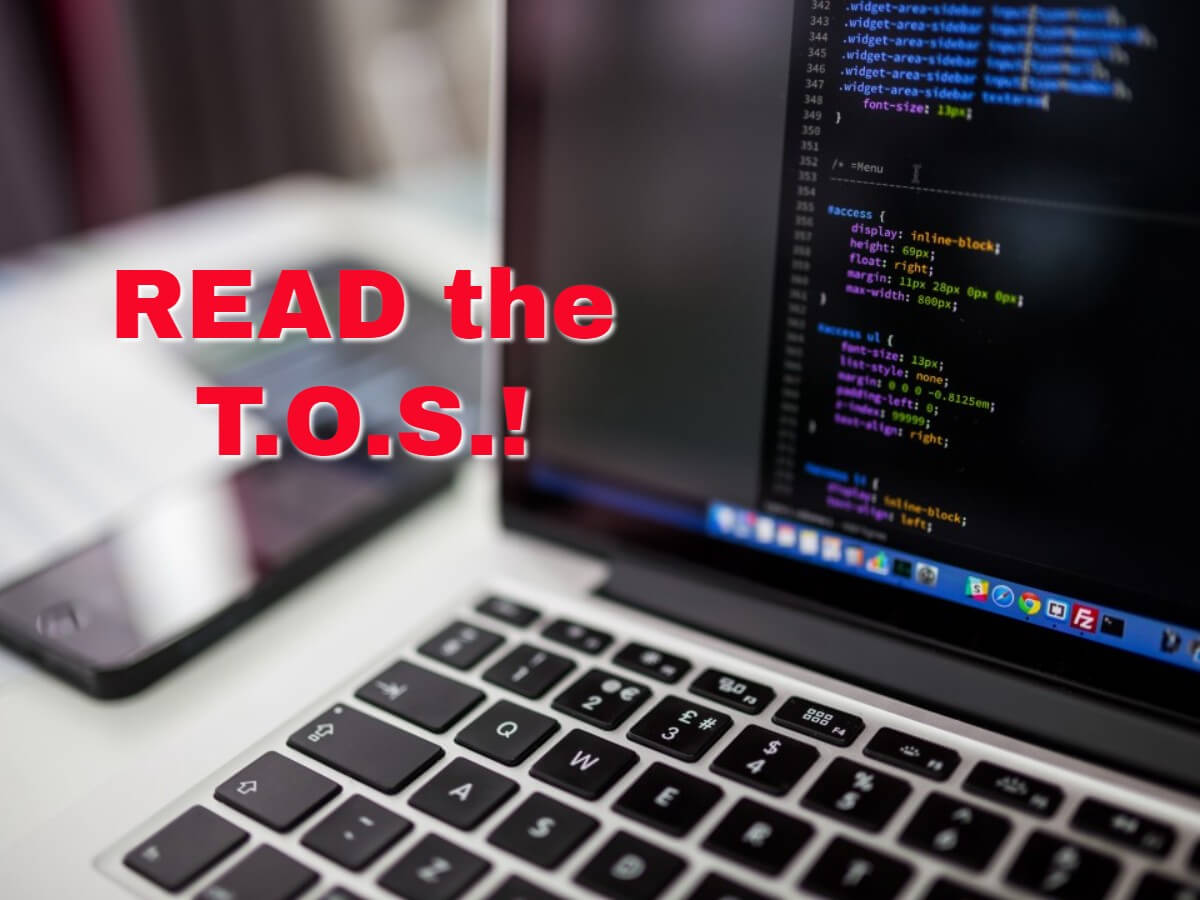 They used to be called contracts.  Online they’re mostly called TOS;  agreements you acknowledge so you can continue to use the online service in front of you.

I’ve often joked that the Terms of Service should offer a 3rd choice to proceed:

Clearly, the normal Joe/Janet 6-pack will rationalize against having to read the TOS at all costs, and who could blame him/her?  No one understands half of what lawyers write, and it would take most people a couple of hours.

We trust.  And thereby we get taken.

None of us can afford to get a rude awakening… so right now, raise your right hand and repeat after me:  “I WILL READ THE TOS FOR EVERY ONLINE SITE THAT ASKS”.

Good.  You won’t regret it.

You won’t regret it like quite a few voice actors who today are saying “Wha?” to the latest move by our fiendish friends at VDC*.  See this “news” PR release to understand what I’m talking about.  Go ahead.  I’ll wait.

It's unethical and a conflict of interest for VDC to claim to represent humans in a VO marketplace, while concurrently feeding off those human voices to create a parallel and competing synth-voice marketplace Click To Tweet

In recent years, a sizeable number of well-meaning voiceover artists lent their voices to VocaliD so they could pursue their stated goal of creating a synthetic voice for those people handicapped with a loss of speech.  The call went out. No pay, just doing good for someone.

Now that VDC is in “partnership” with VocaliD, the goal is doubtfully so altruistic.  Even VocaliD’s TOS wasn’t all that rosy if anyone had taken the trouble to read.

“Once you record your vocal content, your contribution is irrevocable and it may be used by VocaliD® or its affiliates for scientific research, the development of products (including those intended for speech impaired individuals) and for other commercial purposes not yet known. We’re excited about the science behind VocaliD’s Human Voicebank, but please note that there can be no guarantee as to any outcome from any use of your vocal content.”

VDC’s TOS were onerous from the start, particularly paragraph #6.  You can go read it yourself. Personally, I don’t want to contribute to their online numbers.  But basically it says that when you agree to their VDC TOS para 6, you forgo any and all rights to your own voice.

Following the bouncing ball so far?

A VDC partnership with VocaliD, allows access in either direction to a vast library of thousands of voices, it stands to reason that they have all the resources they need to build synth voices on demand.

Sure. Sure, I know.  Synth voices are a long way off from hitting mainstream.  Although the latest offerings are pretty darn good.  See my blog:  NOT “IF” OR “WHEN” BUT HOW MUCH IT’LL HURT OUR BUSINESS.

So let’s say they’re a long way off.  Will that stop VDC from entering the lower-paying market with a “pretty good” synth eLearning voice.?  Uh, NO!  Budget-minded clients will buy in and start to erode the bottom line of our industry?

As Artificial Intelligence improves synthetic voices, all VDC needs to do is expand their offering, having already made a beachhead.

Litigation against VDC’s flagrantly awful Paragraph #6 is currently ongoing in federal court.  But would they have paid so much for VocaliD if their lawyers thought they were on shaky ground?  No.

Make no mistake; Mr. Ciccarelli has long and clearly stated that he intends to control the global voiceover market.  With his millions from CHASE, and VoiceBank already in his hip pocket, VocaliD is but the next step in Emperor Zurg controlling the VO Galactic marketplace.  It’s unethical and a conflict of interest for VDC to claim to represent humans in a VO marketplace, while concurrently feeding off those human voices to create a parallel and competing synth-voice marketplace.

World-Voices Organization is not the VO Police, but we do have a responsibility to educate, advocate, and stand for the ethical treatment of our members.

Please take the time to read the following statement from our President, Peter Bishop:

My guess?  This will die down in a coupla weeks, VDC will lay low, and start scheming their next takeover.

In the meantime, remember the solemn oath you just took, while reading above:  You will always do the right thing for your VO business, by reading all TOS before signing away your rights!