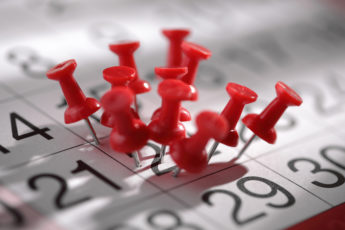 Not all voice-over stuff either… just…life (and my other job).

Not only is the final Presidential Debate scheduled in two weeks on the campus of the University of Nevada, Las Vegas, but just a few days beforehand, our TV station is hosting the only NV Senatorial Debate.  And not just any Senate debate.  The outcome of THIS race will decide who replaces long-time Senator Harry Reid, the one-time Senate Majority Leader.

Add to that various other state and local races, 3 public appearances as an MC for some favorite charitable organizations, and a bevy of special news reports…and you can probably imagine I’m not getting much sleep in October.

Mind you…I’m not complaining.  I’m blessed in many ways, and the thrill of a good story still gets me going.

How do you handle overload, though?

Yup…all of that, but especially lists with checkboxes.  Honestly, I find that to be one of my greatest motivators: to be able to check something off.  Note that I don’t delete items once they’re finished.  I leave it in the list with the box checked to show the item has been achieved.  Now, THAT’s satisfaction.

When I got back from Tahoe this last weekend, I had a list of at least 20 urgent things to be done on my checklist.  As I write this (Tuesday evening), I have only 5 left.

I know that’s a trite saying, but seriously, when you get on a roll…there’s almost nothing you can’t do.  Sure, I can build up a mental block as big as a mountain that keeps me from doing stuff…but more often than not, it only takes me 5 minutes to get it done.  <<FACE PLANT>>

The way I see it, the only way to handle “busy” it to GET busy, and get on with it!

Are ya with me?