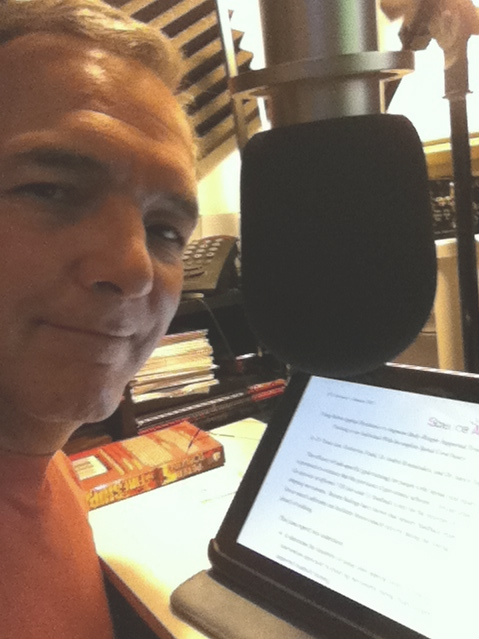 They pop up in my Gmail, and I exhale deeply.

No longer do I gleefully greet each audition request with the hope of opportunity.

But now, they’ve become a hassle.  Like a robo-call.  “Just go away, willya?”

I look for reasons to delete them one by one until only the likliest seem approachable.

Is that awful?  Am I jaded?  Is it time to sell my mic on Facebook’s VO Gear Exchange?

A noted VO coach once began her session to a roomful of top voice actors with audition admonition: “Let’s see what books today!”

I’m still waiting for that day.

An extremely successful voice actor once spoke at a conference under the heading: “Prepare for the avalanche”.

I’m unprepared I guess.  It’s not snowing yet.

When I get emails from VO colleagues asking me about this P2P or that, I’m not sure how to answer.  I’ve tried them all.  Thousands of auditions.  Barely a handful of jobs. So do I tell them the P2P sucks, or my auditioning sucks?

I used to keep an Excel file of all my auditions.  Where it came from, the name of the spot, how long it was, and the date.  You know…metrics are important.  You should know your RATIO, people said.  What’s the comparison of the number of jobs per auditions.

Another noted coach admits out of, say, 100 auditions there are MANY that qualify, that meet the specs, the direction, the technical and talent demands of the read.

So how does she choose?

She’s looking for something that stands out…it could have nothing to do with the quality of your audtion, but it gets her attention.  THAT’S what wins the audition.

Something about that just doesn’t ring true. Something about “you’re good enough, but you have to make a spectacle of yourself to get the audition” seems disingenuous.

What am I missing?  Am I being too straight-laced?  Is my pride getting in the way of getting jobs?  Or is it just THAT competitive out there?

Does anyone else have a sense of helplessness about auditioning any more?

It goes on and on and on.  I’ve been at this seriously 13 years.  I’ve attended dozens of conferences, gotten training from the best coaches, my technical sound is tops, and I am not a quitter.

But I’m on the brink.

When I realize an audition email call makes me say “Go away!”…maybe it’s time to re-think this whole thing.

How long do you keep beating your head against the wall?

I hear one of my colleagues telling me: “Dave, that’s why I don’t use P2P’s.  The best VO jobs are the ones you find yourself”.  Great.  I’m excited for you.  I just happen to be lousy at that too.

Out of those thousands of auditions – yes – I’ve actually won a few.  But my ratio is SO awful that any logical person would say, “dude, it’s time to quit!”

I’ve shopped out my auditions to some top pros…all of whom say my auditions sound good.  I’m “right up there”…”keep it up, it’ll happen”

Every once in a while I write a blog like this, and I always get responses from people who are fed-up with the grand-standing and humble-bragging they see on social media.  They love my transparency.  I suspect it’s ’cause their experience is like mine.

It’s not that I’m not happy for the person who gets the job.

It’s just that I’m tired of it not being me.

(sorry, probably not the most inspirational topic for a Monday)