It’s Not You, Voiceover Time DOES Move Faster as You Get Older (but it might be you) 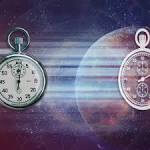 One of the more incredible recent findings in the world of physics is that elaborate scientific experiments are now thought to be influenced by observers.

In other words, there are no objective tests, because someone is watching.  OR, you could say that the universe is structurally arranged so that all the pieces are in relation to one another, and therefore impossible to get separation for neutral results.

That all came to mind as I was researching this blog article on the topic of how time seems to speed up you or the year gets older/longer.

Yes I do research before I write.

…and seeing it’s at the end of another year, I – like you – found myself asking, “How can this be?”  On top of that, I just had another birthday, and that seems to add an accelerant to the whole concept of time moving faster when you get nearer the end of things.

Apparently, this is a topic that psychologists, philosophers, and relativity theorists LOVE to talk about because nothing can really be proven or unproven – just debated endlessly.

Am I wrong, or do freelance voice actors feel this even more poignantly?  We wear to many hats, we chase so much work, we try and fail and try at SO many things to be successful, that it’s easy for time to disappear like so much water under the proverbial bridge.

Well, don’t waste time on this question…there’s really nothing we can do about it. But for those of you (like me) who have unbridled curiosity regardless, I’ve found the top few rationales for the percepti0n that time moves faster later in life, and later in the year.

Most all of these guesses will begin with the context of how you perceived things as a youth compared to now.  No, I take that back.  ALL of the writings on this phenomenon start with that.  I guess it’s more of a commanility between human beings than I thought.

#1 TELESCOPY
The underestimation of time.  Wikipedia had the best definition I could find.

#2 LACK of MINDFULNESS
We have fewer new experiences as we get older.  New experiences tend to slow down our perception of time.  Psychology Today.

#3 TIME PRESSURE
When there’s less time ahead, the anxiety adds to our perception that time goes faster.  Scientific American.

#4 BIOLOGICAL CLOCKS
Our physiological mechanisms change over time, and so does the absorption rate of our perceptions.  The Conversation.

#5  PHYSICS
The reduced speedd at which images are obtained and processed by your brain as your body ages.  Bustle. (kinda like #4)

#6 THE HOLIDAY PARADOX
Your mind encodes new expriences into memory, and tends to skip over familiar ones.  The Elite Daily.

#7 PROPORTIONAL THEORY
As we age, our sense of the present begins to feel short as compared to our total lifespan.  BigThink.

Man!  I feel so much better now that I know why December 2019 got here at lightning speed.

…I’m thinking back to the first downhill sledding expereince I had…now THAT was a memory!!!   Like it was yesterday!