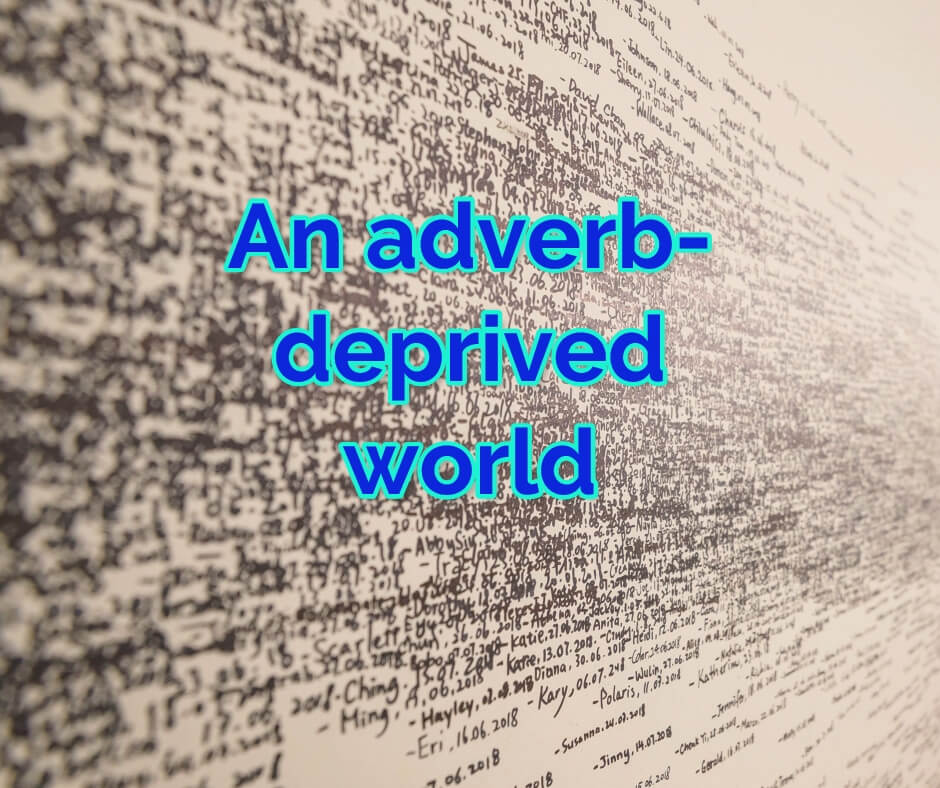 Quick- What’s the most overused adverb in the English language?

It’s so overused, that an internet search reveals long lists of words suggested as alternatives to “very”.  Here’s a list of 147 choices.

Adverbs don’t desrve any more respect than gerunds, prepositions, or conjunctions, but the OCD in me winces when I see the telltale “-ly” missing.  Like in the first word of this blog (under the top heading).

Why You Should Care About Adverbs

In the course of writing this blog, I will make many grammar mistakes.  I tend to use “gonna”, “hafta”, and “wanna” occasionally, rather than their formal representation.  I don’t say “alot”, because I firmly believe it’s two words.  But despite texting, most of us TRY to do our best writing and spelling.  If we didn’t hold a standard, all writing would soon not be understandable by all people.

It’s just that some of us have higher standards than others.

And one of the standards I’m missing (other than the growing absence of -ed at the end of past tense words – See my blog “THE DEMISE OF “D”), is the default to choosing adjectives over adverbs; much like the title of this blog which should end in the words, “really quickly”.

How often do you hear remarks like this these days:

Get the idea?  Just so you don’t feel bad, even respected grammarians understand that dropping the -ly is common in spoken language, but not common in academic writings.  ‘Not necessarily slang, and not necessarily impolite either.

Here’s a good article that explains even more of the intricacies of Adverbs.

How will this effect you in voiceovers?

You’ve heard the word “conversational”, right?  Great!  Hopefully you’ve just landed a big national spot, and the copy is well-written (meaning it’s not full of technical gobbledygook or onerous sales terms).  Your first read-through is going to reveal any hiccups.  A hiccup being the turn-of-a-phrase that is not actually the way you would normally say something.  For me that would include the use of – for example – “quick” instead of “quickly”.

No, I’m not going to passive-aggressively correct the word in my read, and furthermore, I’m not going to deliver the misapplied adverb like I was a 60-something with a bad attitude about the loss of good grammar in the 21st century. Either one of THOSE reads would decidedly not get me the job.

Could I find a more mundane topic to write about for a Monday?  That’s a very good question.  I’ll think about it deep.  Maybe I’ll rewrite this article more succinct.