“Conversational” is the new Announcery 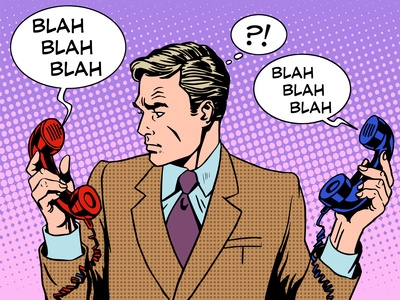 The gig was mine, and the directions were clear:  “professional, educated, confident”.

One day later, the client wanted to know, though, if it could be a bit more “conversational”.

For the 5,000th time this year, I took a big, frustrated breath.

“Of course”, I said, “‘Have it for you first thing tomorrow.”

Never mind the copy is written NOTHING like a conversation.

It prompted me to dust off a rant I wrote about this in 2014 which you will find below.

…and it’s only gotten worse!

File this under:  “the client really doesn’t know what she/he wants”.

…They just know what they DON’T want…and the popular Nazi-delivery du jour is “announcery”“.  We talked about this before.  Announcers are the zombies of the voice-over world.  Dead, but still moving and seeking sustenance.  Please see my blog about how unfair that is, here:  ANNOUNCER DISCRIMINATION!

But I digress.  If they DON’T want announcery, chances are the client is including “be more conversational” in their instructions to the talent.

Why is “conversational” the magic word?  I don’t know about you, but most of MY conversations with people are either:

A: pedantic to the point of a lecture (convo with a stranger, a phone call on a bad network, discussion about my rates with someone who wants a clear understanding, etc.)

B: sloppy, fast, filled with pauses, colloquialisms, inside understandings, and vernacular to the point of unintelligibility.

So when a client says “conversational” it really means you are likely to deliver a contrived creation of sentences that while articulate, nonetheless flows, and sounds “natural” or non-contrived.  Friendly?  Convivial?  Neighborly?  Comfortable?

It’s like Spencer Tracy is believed to have said:  “…acting is all about being genuine and true to yourself…once you can fake that, you’ve got it made…”  AMEN.

The dictionary is not helpful in the search for “conversational”…because it breaks the cardinal rule of never using the word you’re trying to define IN the definition of the word:  “…of, pertaining to, or characteristic of conversation…”

“Conversation” is defined as “…an informal interchange of thoughts…”; “…intimate acquaintance…”: “…social intercourse…”

My head is spinning.  This is why clients ask for “conversational”, ’cause we all think we know what it is, so the greater challenge is delivering “conversational” when the client asks for it.

How does one get in the mode of “conversational”?

One technique used by a well-known coach is to have the talent write an essay about something they feel passionate about…deliver said essay in an equally passionate tone, then immediately turn-around and deliver the copy.

This actually works, but sheesh!…who has the time to write an essay between auditions.  Deliver it once, and the passion goes out…so it’s not usable over and over.

Another oft-quoted mental device is to speak as if you’re talking directly to your best friend…right there among the wires, the headphones, and the mic-stand…right there in your booth.  Yup.  THAT works.

It’s hard to pay attention to the nuances of your speech, WHILE you’re saying it…that obviously takes away the spontaneity of it.  Spontaneity.  That certainly must be a component of “conversational”.

So what I’ve come to is that “conversational” is more about listening than it is speaking.  That’s what a good conversationalist does, right?  They listen.  So listen to yourself.   Are you making sense?  Would you convince you if you said that, that way?

Regardless, if all else fails…just don’t sound “announcery”.  Apparently everyone knows exactly what THAT sounds like!  😉