Are You a PROFESSIONAL Voice Actor? 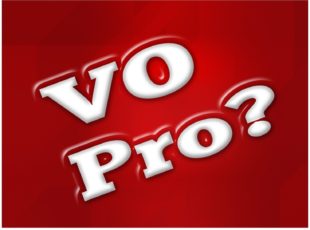 Maybe you don’t even care if you rise to the moniker of “professional” as long as the paychecks keep coming.  The cynic in me says career professionals are a vanishing breed or just achieve that echelon through sheer chutzpah and persistence .   But I could be totally wrong.

So, of the many definitions of “professional”, the following come closest to home:

Any of that seem to hit the mark for you?

In an online conversation with a seasoned voice-actor with oodles of credits (someone well respected by me and practically everyone else), I discovered that this person defines “professional VO” as someone who was a SAG-AFTRA member.  Period.

This person respects that non-union voice actors can be accomplished and in-the-money.  But professional?  Nope.  Gotta be union.

This person’s definition is likely wrapped up in residuals, pensions, health insurance, all the trappings of a secure career.  Perhaps the validation of being in a talent union with all the history, gravity, and conceptual ideology of workers’ rights is the threshold of professional authentication for this voice-actor.

I respect this person’s position, and didn’t argue.  But it could be equally contended that plenty of SAG-AFTRA voice-actors have nowhere NEAR the career or talent of some non-union voice-actors.   Does paying some dues, and having the membership card still make them professional in the classic sense?  Just because they’re members of a union?  That doesn’t rise to the level of “professional” to me.

The person I’m referring too is willing to admit the union has problems; that it’s driven away some talent; that the non-union VO community is growing in strength.  It’s an interesting take on the definition of “professional” that I hadn’t heard before.  I could see the allure of that explanation.

But let’s go back to that first bulleted definition above:  “characterized by or conforming to the technical or ethical standards of a profession”.  I like this one better… but it, too, is fraught with problems.  However, it’s the definition closest to the ideals that we espouse in WoVO.

The WoVO board has long debated the part about talent standards.  We have documents of “best practices” for producers, talent, and coaches, but standards or certification is a slippery slope.  In the absence of an accepted accreditation process agreed upon by some certifying body, there can be no standard.  Any attempt to evaluate talent inevitably arrives at a subjective judging process.  That’s the slippery part. It must be a quantitative, not qualitative test, and when it comes to talent, the closest we come a test is something like a panel of judges at the Olympics.

Technical standards is a different ball of wax, though, and WoVO does offer a studio approval based on objective measures of accepted audio criteria.

And all these mental gymnastics leads us where, Dave?

You work hard.  You pay your dues.  You have passion and immersion in your chosen career.  In time, your success leads you to believe you’re a professional. You’ve earned  it.  School of hard-knocks and all.  You deserve to call yourself professional.

I’ve never taken a journalism course in my life.  Journalists don’t have accreditation either.  Does 35+ years as a TV news broadcaster make me a journalist?  I’d like to think so.  Does the fact that I’m not a SAG-AFTRA broadcaster take away from my professional journalist status?  No.

Boy.  That all got a lot more cerebral than you probably deserved.  But hey, I’m a professional.