Where/When VO Went Off the Rails 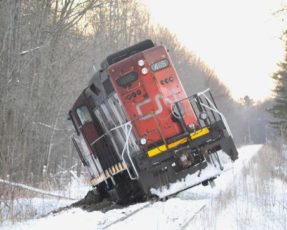 For the 20th time this year, I received a note yesterday from someone who is convinced he has a great voice, and wants to know how to get into voice-overs.

I usually point people to Dee Bradley’s I Want To Be A Voice Actor, but every time I get this query, it makes me think again why it is that great pipes don’t count any more.  Heck, I even wrote a book about it:  More Than Just a Voice.

Bear with  me, I’m going somewhere with this.

You see, a great voice meant you were probably going to be good at commercials, ’cause you’d be a good announcer.  But as we all know, “announcers” are lower than life insurance salesmen on the respectability list.  These days, the world of commercial VO revolves around natural, or conversational, or non-announcer.

And that’s where VO went off the rails.  Once the conversational read became de rigueur, voice-acting lost its pipes.  As we all know…ANYONE can do conversation.  But only people with great voices can do “announcer”.

Wait a minute, Dave…this isn’t OUR fault…WE didn’t make the new rules.  We’re just trying to live up to what the client says he/she wants these days, and they’ve all decided they want conversational.

We both know that’s a lot of claptrap.  The client almost never knows what they want. They just follow trends, and somebody started the “conversational” trend, so now they want that too.

Mark my words, conversational will run it’s course, become ho-hum/everyday, and “announcer” will come back.

But until then, think about it:  VO is just one category where this has happened.

And when you get right down to it, Announcer vs. Conversational had not nearly as much to do with the change in voiceover land as did the internet.

And the internet is not nearly done disrupting.  Oil. Steel. Truck Driving. War.

The only way to get the train back on the tracks is to adapt.  Can you keep up?  Are you agile?…adaptable?

Come to think of it, who needs rails?