The Voice Over Actors’ Handbook 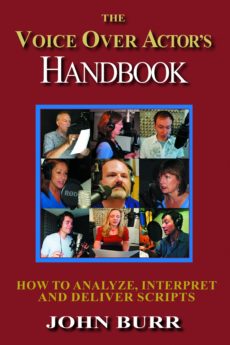 John Burr wrote me out of the blue the other day, and asked if I’d take a look at his newly-published book: THE VOICE OVER ACTORS’ HANDBOOK. He just happened to mention that my book [More Than Just a Voice]  was listed in his extensive “Recommended Reading” Section at the back of his book, so how could I not?  As with most approaches like his, it began with a referral from a fellow voice-actor.  Thanks to Jane Ingalls.

Burr’s enterprise – John Burr Voice Dynamics – is built on the nuts ‘n’ bolts of the oft-overlooked rudiments of script analysis and vocal delivery.  Burr established Voice Dynamics 24 years ago in Washington, D.C. after working in voice over, and as an audio engineer and producer for about 20 years.  The book is a reflection of his experience in this area, and details pronunciation, diction, delivery, inflection, pitch, pause, flow and much more.

When I asked John why he felt this book needed to be written, he replied:
“I discovered with my own students over a period of years that most  of my students didn’t really understand much about the structure of the English language, how words relate to each other, and how so many aspects of language dynamics come into play in the delivery of scripts. (I have an introductory preface to the book entitled Why I Wrote this Book that elaborates on this).”

John didn’t enter into the writing of this book lightly.  “I diligently researched all the books that deal with voice over delivery, stage acting and film acting, and I have not found anything that faintly resembles the focus of this book. I feel that its concepts need to be seriously considered by the acting community.”

Now that I’ve had a chance to peruse the pages of Burr’s “Handbook” (some 270 pages), I can happily recommend it.  Some of the sections may seem tedious, even superfluous to some of the more seasoned voice actors, but as they say:  the devil’s in the details, and there’s plenty of detail to master in Burr’s book.

Some might wonder why I would suggest buying/reading a book that competes in the marketplace for dollars against my own book.  The two appeal to different sensibilities in our realm.  Mine focuses on a reminder that one must have a good business sense to be a success, and John Burr’s book focuses on language dynamics.  Besides, I never expected to recover my investment in the book I published, and believe that this blog should give fair exposure to good VO resources…and Burr’s “Handbook” is precisely that.