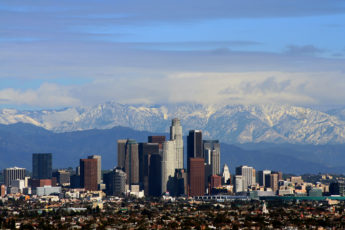 In the starry voiceover galaxy, there’s Los Angeles, and then there’s everything else.

Don’t ask for hard data. I have none.  But seriously, can anyone miss this truism?

LA is the home of Hollywood… the movie industry, and all its attendant services (which are considerable).  Actors have been “starving” to be in LA for decades; and voice actors, after all, ARE actors.

Without naming names, I can think of 5-10 voice actors from other parts of the country who have migrated to the City of Angels in the last coupla years expressly to advance their career.   How?

Some years ago, after a Pat Fraley/Scott Brick audiobook weekend workshop, a prominent audiobook narrator and producer wondered if I would join the roster under his umbrella.  Of course I was flattered…until he found out I didn’t live in LA.  I never heard from him again.  Apparently, he wanted all of his talent to be essentially “in-house”.

Already in this young year, I was lucky enough to get a referral to a well-respected LA talent agent.  The referral came from the agent’s sister.  Not bad.  The agent reviewed my website, listened to my demos, and was overall very complimentary.  Then…this:

“…I only take on new clients based in Los Angeles.  A large portion of the animation and video game companies are based here and we tend to find that out-of-state clients can’t make or do half of the jobs we work on.  With our small and select client list, we need our actors to work on everything.  If you ever end up moving to Los Angeles please feel free to reach out and I’ll revisit representing you…”

I can tell you with 99% assurance, that I will NEVER live in Los Angeles again.  Not in a million.  Even the 3.5 hour drive from Las Vegas is not “close enough”.  Hey, that’s the choice I make, and I understand that limits my advancement in this business.

And don’t think that this blog article amounts to a judgmental bitterness or resentment.  I genuinely honor the decision that others make to rise to the pinnacle of their career in the best possible VO marketplace.  Bravo!

Despite sweeping changes and greater opportunity ushered in by the internet, LA is impregnable.  Nothing substitutes for “being there”.  I keep meaning to ask Randy Thomas about that.  For a while, she seemed to be forging a new path by living in faraway Florida.  I notice she’s back in LA now.

I’ll add that thousands of voice-actors seem quite content pursuing their profession from Georgia, New Jersey, Minnesota and elsewhere. That also is commendable.  One of the luxuries afforded by our business is the freedom to choose a home base in a part of the country that suits you… and just set up a studio.

Always know though, that when shooting for the VO stars, no other supernova shines as bright with opportunity as the City of Angels.