…The Rest of the Story 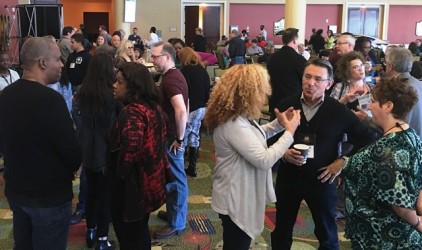 In the side-halls of the Airport Atlanta Hilton, VOA attendees are dishing in hushed tones about the DeWees/Fiverr conundrum.

A few feet away, in the main hall,  J Michael Collins is deftly moderating a panel on pay-to-plays.

Threading its way through both conversations is the seemingly unanswerable question of setting freelance voiceover compensation rates.

The Bill DeWees method is accepting of most anything that comes your way in good faith money…eschewing concern for any effect it may have on preservation of a standard of pay in the VO community.

The JMC attempt to nurture understanding and kindness between seemingly defrauded subscribers, and a juggernaut online casting service paradigm “that’s not going away” is laudable, but unclear in a practical sense.

For what it’s worth, every other freelance profession faces similar challenges:  writers, photographers, grafx artists, etc.

Although the discussion is needed and assuages angst, don’t expect there will ever be an answer equitable to all.

Here, in our little niche corner of the free market, the most productive answer is the adage that the most lucrative work is that which you find yourself.  In other words, go out and get it.  Make it happen for you and your brand.

This philosophy takes many forms, but in each one, the level of effort you put INTO it tends to pay back in kind, what you’ll get OUT OF it:

There’s more.   So much more…but what this approach does NOT encourage?—-> Paying your money into a black-box clearinghouse that magically matches both seekers and talent for those passively waiting for auditions to come down the transom.  Audition quickly and prodigiously enough, and the numbers will work for you!

What numbers?  What control do you have?  Who are you auditioning for?  What kind of a business relationship is that?

Oh, it DOES work, I suppose (never has for me – but others claim it does for them).  So call me old fashioned, but I see MY business as a necessary part of someone ELSE’s business; an irreplaceable part, a dependable part that’s built on relationship, trust, and hard work.

Those are the jobs that don’t list on Fiverr, ODesk, Elance, and Thumbtack.  Those are the business that aren’t settling for a voice in the midst of 100 auditions on Voices.com or Voice123.

The REAL jobs come from FINDING the opportunity, nurturing the relationship, taking the chance and being ready when it comes.  The kind of job that appreciates someone who took the time to find THEM, who knows their needs before they state them, who understands their business as good as they themselves do, and offers a solution to make it better.

THAT’s the job I’m going after.