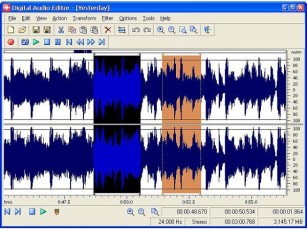 The acronym is DAW.  Digital Audio Workstation.  When I was a newbie, I had to ask, because everybody was using that term.  “DAW”.  Honestly, I think it was a rite of passage, so people could tell if you were a newbie or not…because I don’t hardly hear anybody using that term anymore.

Used to be audio editing software was on a desktop or a laptop only, but that’s all changed.  Tablet and smartphone apps do it all these days, too.

And let’s just get Pro Tools off the table right now.  Everyone knows it’s the most powerful audio editor on the planet, but it’s waaaaaay too much software for a freelance voice actor.  I always say it’s like using an F-16 to cross the street.  Sure, you get there, but in the most expensive and complicated way possible.  Leave Pro  Tools to Chuck Duran and Cliff Zellman.  THEY know what they’re doing.

Then there’s the question of Windows or Mac.  I’m a lifelong Windows user, so this article will be lopsided, but there are plenty of recording/editing solutions that exist in Windows and Mac versions.

This category is like microphones and pre-amps.  There’s no right or wrong answer.  Use the recording/editing software that works best for your process.  For instance, a lot of audiobook narrators like Reaper, ’cause it has some sweet punch ‘n’ roll functionality.

This list also doesn’t really attack the option of 3rd-party VST plug-ins that are on the market right now.  iZotope RX5 and Waves Audio are a couple of examples.  They help with processing, effects, audio repair and more…oh, so much more.  Some work in tandem with the software mentioned here, some work alone…some do both.

Below is a list of online lists…gleaned from internet searches, but let me give you my preferences, first…just ’cause I’m a geek and I love this stuff.

||author note:  adding the following link, which seriously updates this 2016 article with some new 2020 info. A thorough & timely assessment of some top DAW’s:
https://www.videoproc.com/audio-editor/digital-audio-workstation-software.htm||

In my book, nothing matches Twisted Wave (iPhone or iPad), but WavePad is a robust option.  (Both about $10)

There’s only one in my book:  AudioEvolution.  Zellman says it’s like Pro Tools on a tablet.  Rich in features.

Adobe Audition.  (Windows or Mac) Some VO snobs say using AA marks you as an ex-DJ.  ‘Don’t care. It’s tops.  I’ve been with them through Version 3.0, then 5.0, then 5.5, then 6.0, and finally to my current favorite CC.  CC lives in the cloud more-or-less and has even more features than 6.0, not to mention it always updates automatically to the latest tweaks.

Honorable Mention:  Sony Sound Forge Audio Studio  (Windows or Mac).  There’s a “Pro” version, but it’s over-priced, and has more than you need.

Free?  No question…it’s Audacity.  For what you get I can’t believe it’s free.

Below, more lists of top audio recording/editing software.  You start to see the same names pop up over and over.  A tip?  If you don’t want to get the VERY LATEST version of say, Adobe or Reaper, you can get the previous version usually for a great price if you search Amazon or even some other internet sites.  But be careful where you download… a lot of viruses, adware, and nasty piggy-back programs often come from these sites.

Let me know if I missed one that YOU like!