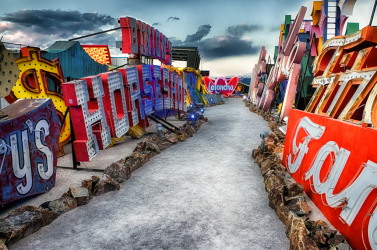 Las Vegas does not dwell on history.  When something gets to be 25 years old, they implode it, refurbish it, or rename it.  Yes, there is a “boneyard” of some of it’s iconic neon signs, a couple of museums (The MOB Museum for one), and there’s even a historical society; but even its members know the tide of sentiment is against them.

Maybe it’s different where you live; where people embrace and cherish the past and its emblems, but for the most part, Las Vegas reflects a pervasive shift in modern social outlook, and defines my first attitude to avoid:

No one wants to hear how it “used to be”.

That means, when you trot out your poignant memories of splicing reel-to-reel tape with a razor to create radio spots, and when you recall the joys of actually spinning vinyl and playing spots on “carts”… no one really wants to hear about it.  Especially those who were not part of that era.  Oh, they may seem cordial, and be appropriately interested, but have you noticed how those conversations quickly squelch the energy in the room, especially among the younger set?  You don’t REALLY miss those days, do you?  I mean it’s nostalgic and all, but honestly, those days weren’t all that good.

You know you’ve got this disease when you immediately concoct arguments to whatever statement is being made just for the sake of disagreeing.  Your mind automatically thinks of ways to disapprove or counteract the mood.  Grumpy old man syndrome often leads to our first attitude above.  Instead of appreciating something trendy or new, your mind goes to “that’s not how it used to be”.  Again…nobody wants to hear it.  Why rain on someone’s parade?  Think Malfoy of the Harry Potter series.

No.  You don’t ALWAYS have the right answer.

The hallmark of this attitude is when you realize you’re giving lots of unsolicited advice.  You begin by saying something like: “Here’s what you should do”.  -or-  “This is what you really need to do.”  A good way to avoid this is to confirm what you hear the other person saying by repeating it.  Then, offer a story of what worked for you in a similar situation.

Hey, all this is great CourVO, but since when did you start giving how-to advice?…I thought this was a VO blog?

It is.  But remember, I started writing this blog for me as much as for you.  It’s a repository of all the things I’ve discovered, researched, learned, and absorbed.  Honestly, I’m guilty of all three of the above attitudes, and I’m not happy about it.  So if this article doesn’t resonate with you, no harm no foul.  But for me, saying it “out loud”…and putting it down in print…helps.

Next time you’re in Vegas, though, remind me to take you to the Boneyard.