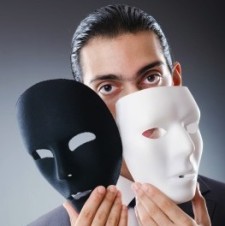 A deceptive ploy is emerging in our culture…unknown to any other society at any other time on this Earth.  It began with the internet — perhaps the greatest catalyst for behavioral change among humans since the phone, or air conditioning, or automobiles.

As a change agent, the enabling nature of the internet is obvious in the work tools, time-savings, and speed of communication it gives us.  But the internet — adapted to humanity’s propensity for social interchange — is an unprecedented vehicle for promotion, advertising, celebrity, rumor, verbosity, and deception.

Think about what you see in online VO forums.  Any amount of posturing, posing, boasting, humble-brags, and outright questionable claims are all passed along as truth.  Sometimes when you see something often enough, you start to believe it.

I’m not saying that your known friends are lying.  But what about those you don’t know?   Can that mention about completing  a 7-part Nat’l Geographic documentary be believed?  How ’bout that national ad for Lexus?  In June, this guy, or that gal has already achieved the $300,000 mark in receipts?

Think about it.  Anybody operating a VO career in that kind of rarified air rarely needs to crow about her/his achievements online in such a public way.

Of course along with the ease of making wild claims, also comes a certain facility to verify claims, and many have been caught in their deception.

Take a look at this post:  “OUR DOUBLE LIVES, DARK REALITIES BEHIND ‘PERFECT’ ONLINE PROFILES”

Who knows…maybe with the declining state of journalism these days, even that article is unsupported.  🙂

I’m just saying:  don’t let your mood be swayed by the chaff and fluff you see online (good OR bad).

What’s legit, then?  Direct answers to honest questions.  Sharing of information, links, and podcast or YouTube resources.  All good.

Prideful claims of unverifiable conquests?  What are they trying to prove?

I love the genuine glee that comes through in a post when a voice-actor realizes a dream, or reaches a high mark in their business plan.  But when repetitive claims of success seem grasping and are stated in a way that seems to help that person believe their own importance, I just move along.