The Case For Face

The Case For Face 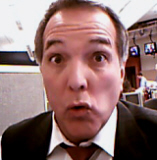 Everything you do online for your VO business:  Demos, Blogs, Twitter posts, FaceBook updates, profiles, newsletters…even email signatures should have a picture.

I used to sit on the fence on this debate…you know…the debate over whether a VO should be heard and not seen.  I was there for a long while.

The argument was that, say…an animation voice actor with a voice that rattles the bass register, but a real-life visage that looks like Pee Wee Herman sets up a conflict in the mind of the prospect deciding whether to hire this voice or not…and loses you the job. That is perhaps the ONLY argument that has ANY merit.

So in the case I just described, at least use your logo. There are a few other scant possibilities where a logo/brand says more than your face, but even there, I would argue for using your logo AND your face.

These days, I’m firmly on the side of the fence that says put your picture of you on all your branding.  I expect to catch flak for this.  So bring it on…but I’m gonna stand pat. “That’s easy for you, Dave…” you say, “you have a face for TV…I have a face for radio.”  That is a pathetic cliché…untrue…and I’m sick of hearing it.

Everybody…even the Elephant Man…can get a decent photo of her/himself with a modest expenditure and an able-bodied photographer.

Why have I switched sides of the fence?

1)  No client wants to see a picture of your dog or cat.  It’s lame.  It’s avoidance, and you stand the risk of the prospect hating Chihuahua’s  (or Siamese cats).
2)  Simpsons Avatars are childish and misleading
3)  Video/pictures are KING…no…Czar…no…beyond that…pictures are the subatomic “God particles” that power the universe these days
4)  They are your best bet to immediately personalize and solidify your character and identity to first-timers.
5)  Everyone, especially clients, have a natural inbred curiosity about how you look.  (And they’ll feed that curiosity with whatever pictures of you they can find on FaceBook.  What WILL they find there?)

The hunger for your pic is not fair.  It’s not even legal (I think) but it’s how we’re wired.

‘Hate to run the risk that people don’t like moustaches, or glasses, or long hair, or tattoos or chubby people?

If they’re that close-minded and biased, do you really want them as clients anyway?

In case you haven’t noticed, the new currency on just about every manifestation of the digital universe is a picture (or a link, or both).

So use a picture…make it a standard headshot, a photo with you and your wife, you and your kids, you cutting up (ever see Pat Fraley’s headshot…he’s always laughing, and his eyes are closed).

Use a pic of  you in B & W, you in sepia, you with a mic (cliché too, but bearable), you with a trophy, you upside down.

Nancy Wolfson can’t take a bad picture, and this is one she’s used before…there’s a coy assuredness to it that says a lot about Nancy.

Use a shot that speaks to your true character.  For every photo of you that you think is edgy (risky) there will be as many who love it as who

hate it…so it’s a wash.  In 1996 I shaved off my moustache of 26 years.  I told no one.  Viewers called in for days…somebody in the newsroom started keeping track.  It came came out absolutely 50/50, for/against.

Further reason supporting the argument for pictures or video:   YouTube.  Need I say more?  The thing is a juggernaut.  Bad video, shaky video, awful on-cam appeals…it all survives and thrives.  People are hungry for pictures — moving pictures, bad pictures, grainy images …ALL OF IT is worthy these days.  Don’t ask me why…but it’s true.

My final appeal to make you see the wisdom of including a picture — SOME PICTURE — with everything you do online, can be summed up in one word:  PINTEREST. Pinterest is one of the hottest Social Media sites going…and it’s entirely driven by images.

Sure, there’s all the connections and relationships you can curry there.  Make comments, add copy…but bottom line:  it’s the picture that brings you in, and keeps you looking.  Don’t believe me?  Read this:  HAVE YOU EMBRACED PINTEREST FOR YOUR BRAND?  Or read an article from my blog (in case you missed it):  A VO’s Place on Pinterest.

Still don’t believe me?  Google Bill DeWees or Terry Daniel…both of those voice actors have figured out how to capitalize on video to help their voice-acting business.