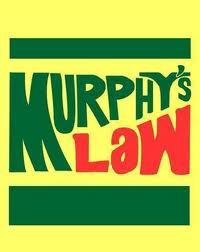 Everyone knows about Murphy’s Law:

“If something can go wrong, it will go wrong”

The corollary is:  “nothing will happen, until it’s not supposed to happen”.

I just made that up…because it’s also true, and if it doesn’t make sense — let me offer some anecdotal evidence.

I’m not proud to say my Summer workflow has been less than busy.  Days.. even weeks have gone by with nary a job.  I’m working on some big changes in my marketing to fix that, but in the meantime, all I’ve had are a lot of promises from dependable clients that sounded like this:

“…We’re just waiting for script approval from the top…”

“…As soon as the producer gets back from vacation…”

Of course, I don’t hang my hopes on such airy statements…but — you know — it would’ve been NICE.

So, I waited, and set my sights instead on a long-planned celebration of my 30-year wedding anniversary in Ireland.  More about that in tomorrow’s blog… I’m leaving Saturday.

You can probably guess what I’m about to say.

All those “promised” jobs are now suddenly CERTAIN, and beyond that…they need to be done NOW, or during my time in Ireland.

“nothing will happen, until it’s not supposed to happen”

In most cases, the last-minute development means a loss of the job to someone else.  My only hope is that script approvals will take even longer…extending into the time after my return. (or not).

I know this has been noted before among voice-acting circles, prompting Murphy’s Axiom:  “If you need work, just plan a vacation.”  🙂