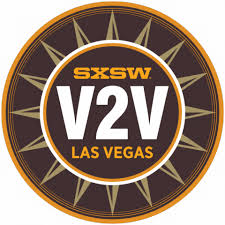 Voice Over people get technology.  They have to.  After all, developments in the virtual world, electronics, communication devices, and the cloud have extended opportunities from NYC and LA to real jobs no matter where we live.

Right now, the tech-world’s toniest conference is in Las Vegas, venturing beyond Austin, TX…dropping thousands of geeks onto “The Strip” in Vegas.

They chose one of the hippest new venues to throw this party: the Cosmopolitan; part of MGM Resorts’ new City Center.

As much as I’m chompin’ at the bit to stroll the exhibit hall and attend the seminars with all the cool cats, it might not happen for me.  Our reporter assigned to the conference on Monday said media reps are clawing and scratching for passes.

For those of you who don’t understand the acronym title… SXSW stands for South By SouthWest… and for years  now, this conference has defined what is the bleeding edge of the innovation in the tech world, and it’s always been in Austin, TX.

In Vegas, organizers added the “V2V” suffix, and left the definition up for grabs.  So make up whatever you want of  the V2V designation, there is no official definition…’guess that makes it cool…but here are some suggestions: Visionaries to Vegas, Vision to Venture, Voice to Voice, Venture to Vegas.

Maybe this is why I was drawn to Las Vegas years ago.  It’s fitting for the SXSW conference to be here.  This city has always been a place of innovation:  marketing, theatre, lighting, electronics, publicity, showmanship, music, and the list goes on and on.  In the 28 years I’ve been here, this town has re-invented itself (as in total makeover) at least five times.

Of late, Tony Hseih — CEO of Zappos — is the city hero.  Zappos bought the vacated downtown city hall, moving the company headquarters in, and using that as an anchor, he’s set about to transform a tired downtown community into a rejuvenated and vibrant, hip, young center for technology.

If you love trends in technology even HALF as much as I do, keep an eye out for reports from SXSW V2V.  There will be plenty of buzz, believe me.  For starters, here are some links: