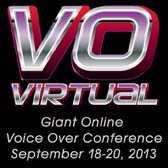 Not like it’s any big secret, but now it’s for real.  VoiceOver Virtual is having it’s grand opening today.

You’ve probably heard somewhere, either from a VO friend, or at FaffCamp, or here on this blog that Voice Over Virtual was coming.

VoiceOverXtra’s enterprising John Florian is the founder, instigator, visionary, and tireless taskmaster behind this event.  Blame him.  Actually, praise him, ’cause VoiceOver Virtual (VOV) has legs…long legs.

Florian wanted to launch it earlier, but worried about stepping on toes, he agonized over the timing, and then the endless details that go into organizing and launching a first-of-its-kind experience like VOV.  Now, the time is right.

I encourage you to head on over to the website for VOV now to see all that’s gone into making this a truly innovative and ground-breaking event:  A Voice-Over conference, entirely conducted online.  No making hotel reservations or making flight arrangements.  True, there are advantages to in-person VO conferences, but there are distinct advantages to the online version too.

Mark your calendars for September 18th – 20th to spend some time on your computer inter-relating with your friends, peers, coaches, producers, and others who are thought-leaders in the voiceover realm.

DISCLAIMER:  I’m part of the staff for VOV, and as such I can’t be counted upon to be entirely objective.   But you know that I’m also a true geek, and was one of John’s supporters from early-on for this seminal digital event.  This is something whose time has come,  You’ll recognize many names among the staff:  Tom Dheere, Dan Lenard, Denise Chamberlain, Elizabeth, Martha Kahn, and Elizabeth Holmes, and many more dedicated souls.

I encourage you to stop on by, kick the tires, and consider what this event might be able to do for your voice acting career.  Please don’t be put off by some of the yellow tape “under construction” signs.  I’ve seen the engine that powers this online event, and it’s truly impressive!  In short order those features will be available for your perusal.