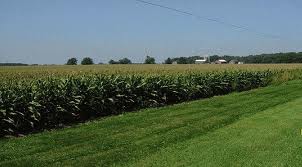 Most people don’t think of Illinois as vacationland.

Scenes like this one run for mile after flat mile…only this year — with the drought — most all the corn is brown.

There’s nothing fancy or exotic about Illinois, but it’s usually green, and it’s home to me.

On the family farm about 50 miles East of St. Louis on I-70, I’ll meet my two sisters and their spouses for some well-earned R&R.

Oh, I’ve had some time off in 2012.  Lessee…there was the few days I took to go to Faffcon in March.  Then there was a trip to NYC for APAC in June, followed closely by almost a week off to go to VOICE2012 in Disneyland.

All those excursions were certainly enjoyable, and good for my business, but they were more what you would call “working vacations”.  After each trip, I was more or less exhausted.  Since June, I’ve had maybe one 3-day weekend, and a couple of sick days.  The daily grind of working two jobs can ruin one’s attitude eventually.  I’m there.

It’s time for some serious, dedicated, and determined down-time, and that’s what I plan to do all this next week.  I’ll be posting some pictures and maybe some brief musings here for the following days, and then while FaffCon5 is in its heyday weekend, I’ll be coming back to Las Vegas, hopefully rested and fulfilled.

When’s the last time YOU took some planned time away?…off the grid…purposefully seeking some quiet and a drastic change in the hectic schedule?