3 Reasons to Narrow Your VO Focus 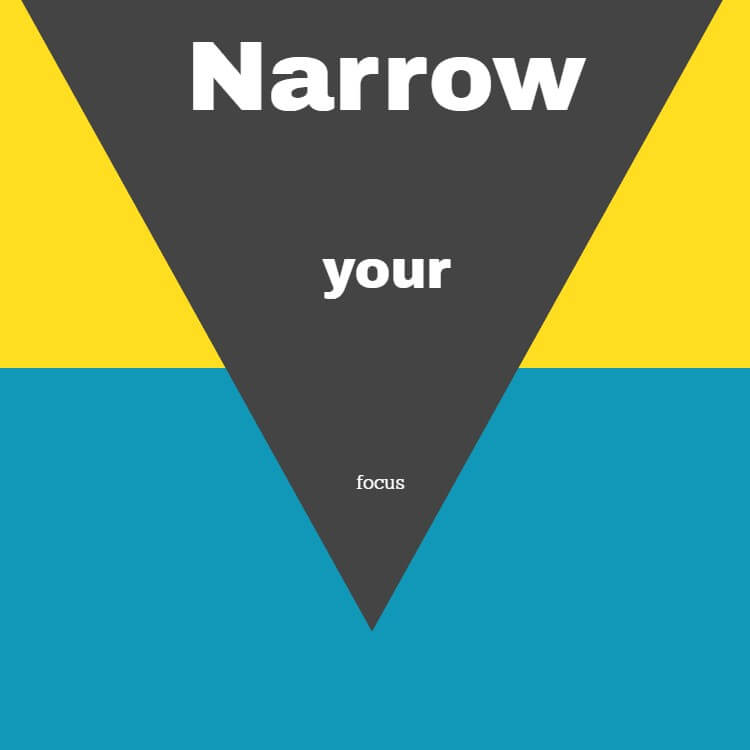 That phrase gleaned from any self-respecting Jr. High Social Studies text explains the accepted concept of modern society that allows for coordinated specialization as a way to advance progress in complex and heavily populated communities.

One person mines coal, another creates social media ads, and yet another fixes sick cats or sells realty.  The more advanced we get, the more we rely on this paradigm.

I can’t begin to tell you how motorized fuel injection works or know the skill of replacing a filling in a tooth, but happily, someone does when my truck isn’t running right, or I have a toothache.

Similarly, someone depends on us to deliver professional-sounding audio files, according to directions and scripts, and other parameters, ’cause voice-acting is more than just talking — kinda like expertly playing the flute is more than just OWNING a flute.

Going a step further, mastering an audiobook takes skillful manipulation of specialized software.  Not just any narrator gets how to do that.

There are just a handful of voice-actors who can do several genres with great skill.   There are bushel-baskets full of voice-actors who THINK they can do that many specialty genres.  But the truth is, the more you drill down to become an expert in any ONE voice-type, the better your chances at success.

Back in the day, a “renaissance man” was thought to be the most desirable of intellectuals.  I think back to some of the people who founded this country; farmer statesmen who could shoe a horse, build a house, and still know how to argue a debate in a town hall meeting.

No one has a set of pioneer skills under one hat anymore.  Bill is an expert at Microsoft Excel, and Marcia writes the best public relations release you’ve seen…but it kinda stops there.  More and more of us don’t even know how to cook food.

This is not a criticism, this is the way it is.

I love to dabble in sociology, software design, theology, calligraphy, cinemagraphs, and writing, but voice-acting is paying my bills right now.

I’d love to be live-announcing the Oscars in 2019, or narrating a Nat Geo documentary, but maybe first I should get REAL good at eLearning.

The best marketing today could be taking place on Social Media, but that’s a bottomless pit of souls flailing around in endless trial ‘n’ error.  Is that my best use of time?

Oh.  I promised you three reasons to narrow your focus.

So, it’s taken me this long to get to #1:  because doing ONE THING professionally, pragmatically, and precisely is your best shot at being productive (profitable).

Numbers 2 & 3 follow logically.  If everyONE is trying to do everyTHING (and it’s the same thing everyone else is doing), then that’s creating a surplus, which drives down the value of that thing.

#2 reason to narrow your VO focus, then, is to do something rare and unique.  then you’re narrowing the field, specializing, and being an anti-renaissance man with ONE certain, needed skill.

#3 reason to narrow your VO focus, finally, is to do something valuable, with excellence, that is marketable.

In the meantime: Go…practice fly-fishing, the harmonica, or oil painting for a diversion.  You may get good enough to eventually hit #1, 2, & 3 in the fly-fishing, harmonica-playing, or oil-painting category.

Until then, I’m counting on fresh trout in my grocery store, a track from Blues Traveler, and Jackson Pollock for the division of labor that satisfies those needs.

Who’s gonna depend on your for your special voiceover skill?