What Sort of Game are You Playing? 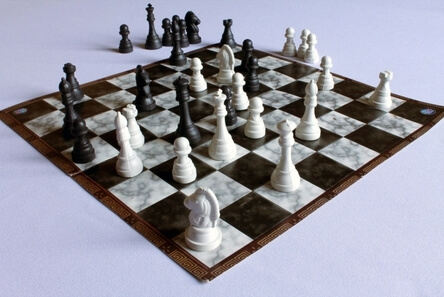 Your life, your family, your work is NOT a game.

And yet, life…and certainly work, has many parallels to a well-choreographed game, so play along with me for a bit?

You’ll agree with me, I think, that it’s unfair to characterize voice-acting as an either/or enterprise. The real world accepts more shades of grey than the certainty of black ‘n’ white; but this is a game we’re playing, right?

So if voice-acting is either/or, let’s imagine for a second that there are the hobbyists/amateurs (it’s a job) on one side of the chessboard, and serious professional-minded players on the other side (it’s a career).

Both players love their work, and are there to get ahead.

But the hobbyist is playing a finite game.

The career-minded voice-actors are playing an infinite game.

The finite player is in it to win.

The infinite player is in it to keep on playing.

Since the finite player is in it to win, she/he doesn’t mind finding a win at (ahem) certain P2P’s, where greed and inscrutable business people are also playing a finite game.  By the same token, the finite voice-actor doesn’t mind underbidding her/his colleagues in a race to the bottom of the compensation barrel, because in the end they got the job (win!)

The infinite player, though, finds voice-acting a self-perpetuating avocation (not vocation) that demands a respectful tip o’ the hat to her/his colleagues, and an effort to preserve gains that were hard-fought before they even got to the chess-board.

The finite player builds mistrust and breeds insincerity as everyone is must be overcome to get the win.

The infinite player doesn’t see other voice-actors as competition, but as a worthy rival, there to make each other better.

The finite player is an island.

The infinite player is in community.

These are not my original ideas.  I only adapted them to voice-over from an address I heard at a leadership forum.  The speech was given by Simon Sinek, a sociologist, author, thinker, and influential leader in his own right.

Sinek was speaking on the premise of book he’s authored called The Infinite Game.  Available on Amazon in hardback and Kindle.

I’d highly recommend it.  Within, you’ll hear him describe the encounter between an infinte player and a finite player.

See Simon Sinek speak about this concept in the video below.  Lotsa parallels to the current choices you have before you in the realm of voice acting.