…and the answer is…

One comment.  Hmph. Thankyou Liz Drury for being my only respondent.  Hers is not the thought I had in mind when I saw the two-fer picture, but A+ for taking the time to respond, Liz.

I’ll only say that DeWees has been doing YouTube vids for a long time, and Erik is just getting started.  The difference in the total views (given they were only posted a day apart) is telling. It shows that a consistent approach to helpful videos pays off.  Erik has only this year begun posting his “The Outspoken” video series, and Bill has been at YT videos for several years.

Liz, Erik is anything BUT a fake voiceover artist, he’s quite accomplished, with a long track record, and only in recent years has he branched into being a talent agent.

Bill is also accomplished as a voice actor, and within the last few years has branched into coaching and demo producing.

Interesting that Erik stated in one of his videos that he thinks it is negligent for anyone to facilitate the bringing of new VO talent into the marketplace these days (paraphrased)…and that’s exactly what Bill does.

Voiceover Land operates under a big umbrella, doesn’t it? 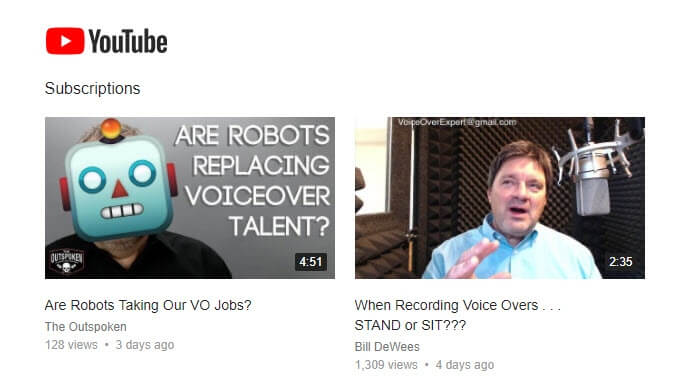