WoVO: For All the Right Reasons 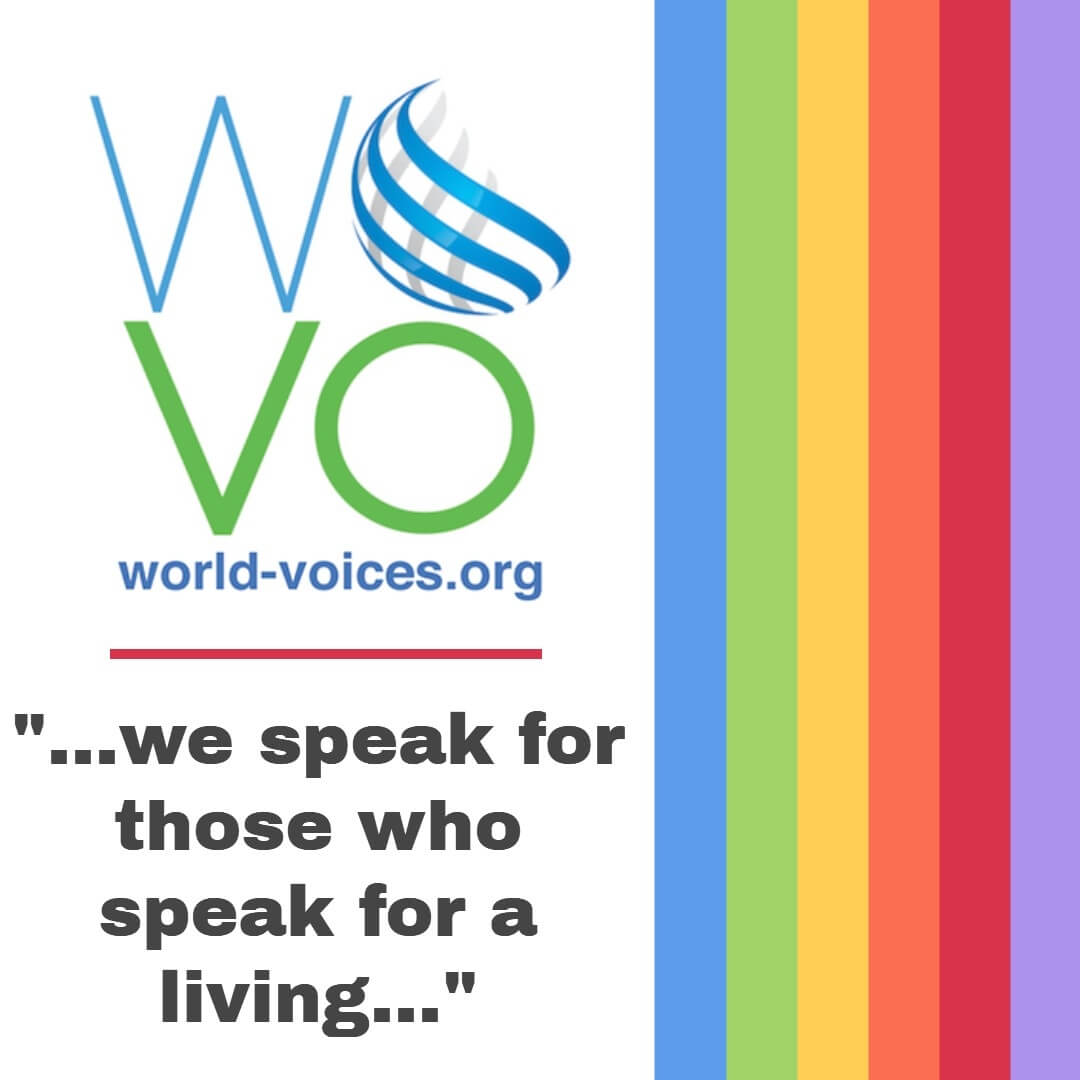 As I approach the end of my term as the second president of World-Voices’ executive board I’m getting sentimental.

I was one of four inspired, high-minded, and motivated voice-actors scrunched into a car one evening at Ventura FaffCon in 2012.  Four, who had had enough of shoddy practices, ethical breaches, and professional degradation from within the ranks.

Lord knows what prompted us to stand on our own principles and put our money where our mouths were.  Each of us ponied up $250 dollars, and off we went to create the first industry trade association for voice actors.

The wild ride that’s ensued since then taught me much.  I’ve learned a metric ton about relationships, people, politics, motivations, and incentives.  Most of that time, I was balancing two full-time jobs AND a family life.  My wife is a saint.  Hands down.

Next month will be my last month as Prez, but I’ll remain on the board.  Since my name and my reputation are all wrapped-up in WoVO, I feel it’s important to stick around a while more.  I hope that doesn’t prove to be a bad decision.  We all must move on, and when I start to feel that I’m a hindrance rather than an asset, I’ll go.

Till then, I’ll beat the drum for integrity, ethical behavior, and just generally taking the “high road” in our profession.  I understand much of that is open to interpretation.  But that’s the BOLD thing about WoVO….we’ve really tried to put teeth into our talk.  A founding member, but outside counsel – Rob Sciglimpaglia — penned three important documents for us.  Rob has earned the privilege to appear before the US Supreme court if so called.  I kinda think that gives him somewhat of a moral high ground from which to stand.

His “Best Practices for Producers” has stood the test of time from its inception 6 years ago, and I’m including it below in case you haven’t read (or in case you HAVE seen any one of a number of hair-trigger temper exchanges in the many online VO forums of late).

I wish I had a Bitcoin for every time I had to field the question from a prospective WoVO member that goes like this:  “…Well, what’s in it for ME..?”  Plenty, but that’s not the point.  It’s what YOU can do for your community…for your fellow career voice actor…for WoVO.

There’s a definite place for this organization, and there’s a place for YOU in it.

In order to have a transparent and honest voice-over education market, it is suggested that voice-over coaches and demo producers follow these Best Practices, and always strive to:

1. Honestly evaluate a student’s abilities in a fair and objective manner, without regard for monetary gain.

2. Be fully honest and specific with students about the prospects of securing future work in the voice over industry and not speak in generalities. These prospects for future work should be based on substantial time of “on microphone” training with the student, preferably at least an hour, and should not be based on a cursory review, i.e., hearing someone speak “on the street”, or for a few minutes in a casual setting. Ideally, a student should be exposed to a mix of phone, live (classroom and studio), web-based and self-study training sessions.

3. Communicate students’ abilities to them in a fair and objective manner based on specific performance criteria.

4. When being engaged by a student, state the basis of all fees in writing, i.e., hourly, flat, etc., and fully state what the fees include and exclude. Provide a best estimate of the total cost of the student’s voiceover education to get them up to professional performance standards to be able to reasonably compete in the open market, PRIOR to the student engaging training services. It is understandable that every student is different, and that every student’s pace of learning is different. Therefore, strive to communicate with the student on an ongoing basis as to their progress so that they can assess their investment of time and money.

5. Never rush a student into producing a professional voice over demo until both coach and student are reasonably convinced that the student is ready to compete in the professional marketplace, and not tell the student they are ready simply to get them to pay more money for coaching, or to produce a demo. Not hinder the student’s ability to obtain a “second opinion” from another coach of their choosing as to their “readiness.”

6. Not accept referral fees or “kickbacks” from demo producers, talent agents, casting directors or anyone else to which student might be referred for services, unless full disclosure is made to the student regarding such referral fees, and the student consents, preferably in writing.

7. If student’s demo is produced in house, have the demo match the student’s true and current abilities, meaning the demo will not be “overproduced” so that it misrepresents what the student can actually do if hired to do a professional session, or if called in by other professionals such as a Casting Agent or Talent Agent based on their demo.

8. Refrain at all times from acting as a talent agent for students, explicitly or implicitly offering to procure work for students, understanding that this is an inherent conflict of interest. The term “talent agent” means getting paid a commission or otherwise for procuring employment for the student. This should not be interpreted as referring business contacts or potential business to students as a favor.

9. Refrain at all times from acting as a casting agent for students or implying that by utilizing coaching or demo services, they will be eligible to be cast in projects the coaching or demo company may be producing in the future. Understand that this is an inherent conflict, and if promises or implications are held out as a benefit of utilizing a particular company, statistics will be provided as to how many of the coach’s or company’s students were in fact cast in projects the company had produced prior to the student agreeing to study with the company. As in 8 above, referring potential business to students gratuitously and not for a fee or commission is not being discouraged by this rule.

10. Promise to act competently with students at all times. In other words, if teaching areas of the industry in which the coach did not actually work, i.e., audiobook, commercial, e-learning, promos, etc., this will be disclosed to the student, the coach will refrain from coaching them, or will refer the student out to a teacher that is competent in that field or area, or obtain the students’ written permission to teach them in those areas.