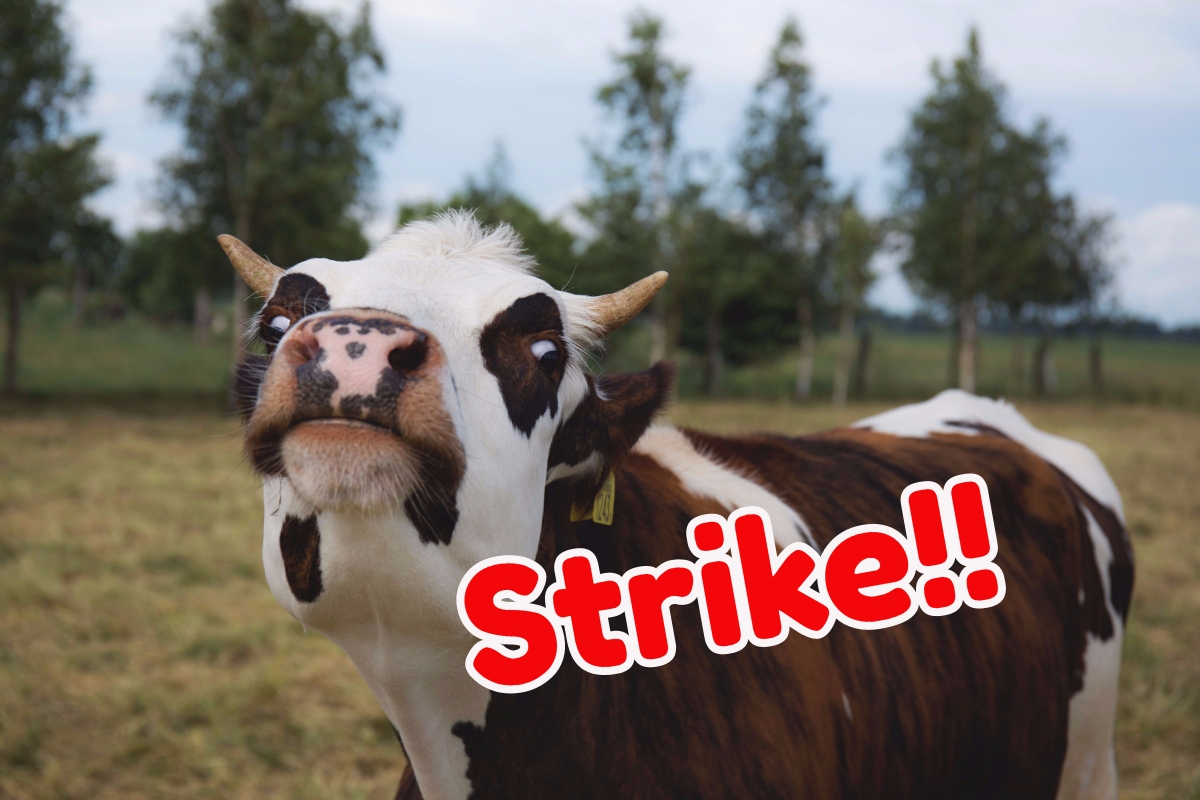 Within hours of the announcement that the nearly year-long SAG-AFTRA strike against 11 video game production companies was being suspended, Union representatives called for a strike in Omaha, Nebraska against the cattle industry.

The surprise development marks an unprecedented move for the Southern California-based talent union,  SAG-AFTRA leaders claim their members in the Eastern Nebraska town are being contractually abused by the corporations that control the lucrative cattle auction houses in this influential bovine marketplace capital.

A spokesperson for Omaha Auctioneers United (OAU) – Leviticus P. Hackensnuff – told UPI, “We were astonished that SAG-AFTRA took an interest in our cause.  We didn’t know they even cared about our small corner of the performance industry.”

After repeated requests, late this afternoon, Union officials in Hollywood sent the following statement by email to UPI’s offices:

“SAG-AFTRA is outraged at the treatment of our brothers and sisters in the cherished auctioneering arm of our voice-acting community.  Especially, those who have endured demeaning and disrespectful treatment by the entrenched auction-house owners in Omaha.  We are calling for an immediate and complete work stoppage in the 7 major centers for cattle auctions, and demand the corporate officers of these auction houses come to the table in the spirit of fair negotiations.”

“We call on our fellow union members in the related areas of meat-packing, beef-haulers, and food distribution to join us in this strike.”

As of deadline for this publication, we have received no statement from any of the auction house owners.###

The above fake news release is a total fabrication.

In fact, you will likely NEVER see such an announcement, because SAG-AFTRA:

I’m sure the above generalizations are inflated, bloated, and unfair characterizations of SAG-AFTRA’s hard working staff.  But don’t you find that satire is only funny because of the grain of truth that is buried in the falsehood?

For the REAL announcement about the successful closure of the video game voice-actors strike, please see the reprint below.  Yay voice actors!

Our negotiating committee has reached an agreement to end the strike against 11 video game companies that has been ongoing since October 21, 2016. Accordingly, you are free to resume working for the companies that were struck on all titles effective immediately.

I want to acknowledge the incredible work of the SAG-AFTRA Interactive Negotiating Committee, chaired by Keythe Farley. Their commitment to reflecting the concerns and the voices of the member community is embodied in this agreement.

The terms of the tentative agreement, which was reached early Saturday morning, resolved two points of contention we had with the employers: transparency and secondary compensation.

First, it instituted a new bonus structure that provides an additional payment to performers beyond their session fee. The newly-bargained terms also include significant improvements in the area of transparency.

This expanded information will empower performers and their representatives to bargain knowledgeably for compensation and to understand the nature of the performance that will be required, both of which have been a challenge for our members in an environment characterized by code names and secrecy.

The National Board will vote on the contract at its October meeting. The new terms take effect upon ratification.

In the meantime, members are free to provide covered services pursuant to the expired terms of the prior Interactive Media Agreement with the struck companies effective immediately.

[disclaimer, the author of this article is a dues-paying SAG-AFTRA member]