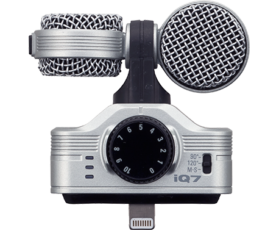 If only I had a dollar for every blog I’ve written about mobile recording.

Something about this realm fascinates me, and hardware vendors keep obliging!

Several worthy candidates easily plug in to your iPhone.  Here are some recent articles extolling the virtues:

It’s important to note that even with the finest mobile recording environment, it’s not likely that an iPhone mic will ever match the quality of your home recording studio.  But in a pinch, I’ve heard of clients certainly accepting auditions that way, and even an occasional final cut being accepted from an iPhone/iPad/Android Device recording.

Zoom is a favorite of mine in this area.  The Japanese firm has a plethora of products on the market.  I personally think their H6n stand-alone portable field audio recorder is the best you can buy, and has served me well in the field. 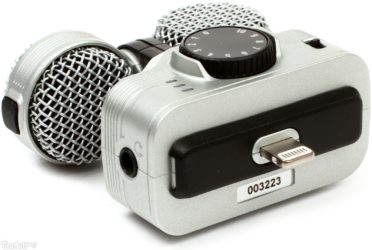 For iOS, their iQ5 and iQ6 plug-in units are fine…but don’t compare to their latest offering:  the iQ7.

The iQ7 is a full-featured mid-side stereo condenser mic that plugs right into the lightning connector on  your iPhone 6 or 7 series.

You get a large manual front-facing gain knob and an LED meter, along with a dedicated headphone jack that doubles as a line output.

According to their features page, Zoom says the “…The iQ7’s rotating mechanism ensures correct left-right stereo orientation whether you’re creating audio-only recordings or capturing audio for your video…” 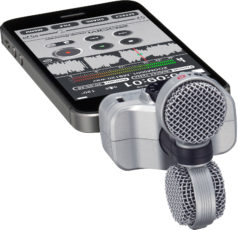 What is mid-side recording?

Mid-side is an advanced recording technique that allows the width of the stereo image to be varied, even in post-production.
The two microphone elements in the iQ7 include a directional “mid” mic that captures signal coming from directly in front of your iOS device, and a bidirectional “side” mic that captures the audio coming from both sides.
A three-way switch allows you to select between 90° (to focus on sounds coming from the center) and 120° (for a wider image that includes ambience and room signal). A third setting, labeled “M-S,” enables you record the audio “raw” and adjust its stereo width afterwards, using Zoom’s free downloadable Handy Recorder iOS app.

Retail for the iQ7 is about $100 no matter where you buy it.

When I get mine, I’ll try to post some soundfiles here to give you an idea of it’s practical usability in today’s VO marketplace.