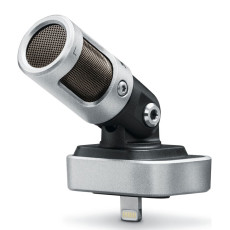 Because I’m a geek at heart, I’ve probably written more blogs about gear than anything else.  Or a close second.

Especially blogs about mobile recording, and even more specifically, about mics that you can plug into a smartphone.  Most recently I wrote “The All-in-One Smartphone A/V Studio”.  The array I reviewed at that time included the “iRig MIC Field” mic that plugs into an iOS phone with the lightning connector.

I still use it today.

But companies are always competing and innovating, and goodness knows everyone is saying mobile is the future.  These devices don’t yet rival the fidelity of your studio set-up, but more and more you hear about people delivering auditions, and even fulfilling a client’s needs with a final recording from an iPhone.  Remember, it’s more important WHERE you’re recording than WHAT you’re recording with.

The latest offering I noticed recently is from a venerable name in mics: Shure.  The Motiv MV88 is just one mic in the Motiv series.  The ’88” is a digital stereo condenser microphone with a lightning connector, and when you visit the site, you’ll see all sorts of mentions of every other use for the mic except voiceover (sigh), but we’re all familiar with being snubbed by vendors, right?

Shure would like you to buy the attending app that goes with it.  I do not own the “88” nor the app, so I can’t honestly evaluate it for you, but the Shure website offers a sound comparison using the “88” in a live setting v. a vocal instrument recording.  You can also watch a slick informational video on the MV88 on the site.

The Motiv MV88 comes with a windscreen, a headphone adaptor cable, and a carrying case.

As I said, I have not had a chance to see/hear the “88” in action, but just on the face of it, I’d say the $149 pricetag would make me think twice…no matter how nice the carrying case is.

It’s for sale at your favorite online dealer (Sweetwater, B&H, Musicians’ Friend, etc.), but I don’t see it anywhere for less than $149.  Here’s the BSW link the the MV88.  By the way, BSW is having a mic sale right now, but they’re ALWAYS having a mic sale! 😕

Anybody got one of these, and can tell us how you like it?