Maybe all this Consumer Electronics Show stuff is going to my head.  CES is in Las Vegas this week.  Then again… I’ve never been short on gusto when it comes to playing with the latest devices.

Regardless, let me share with you what I think is a winning combination of 3rd-party (aftermarket) audio and video accessories for my smartphone (iPhone 6+) that achieves pretty good A/V status.

The search began when I committed to ramp-up the use of video in my marketing goals for 2015.  But how can I abandon a commensurate boost in audio when that is (after all) what we do?

The result was the combination you see in the picture.

All the other specs and features are available on the iRig MIC Field product page, but the reason I liked it was it’s size, the fact that you can use it for a “selfie” recording, or pointing away from the iPhone screen.  It also pivots 90º for landscape or portrait orientation,  has a rudimentary built-in multicolor audio input level indicator, and a thumbwheel gain control, &  headphone output jack.

Of course, iRig recommends using this mic with it’s free iRig Recorder app…but you can do so with any iOS recording app.

I’m including two recordings of the first lines of Lewis Carroll’s “Jabberwocky” using the iRig, and then using the native ambient iPhone mic.  Both were recorded on the iRig Recorder app.  I did not tamper with anything on the resulting sound file, including the gain, which is the most noticeable difference between the two recordings.

For the video part of the equation, I chose the Olloclip.  Made new  for the iPhone 6+, the Olloclip is well manufactured, and 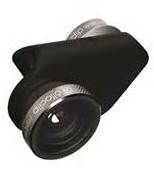 simple to use.  It clips right over the top of the phone frame, and aligns perfectly with the front or back camera with a snug mounting slot.  It offers 10X and 15X close-up macro, as well as wide-angle, and fish-eye lenses.  It works with any installed photo or video app, and looks built to last.

The OlloClip was $79 at B&H photo ($89 most everywhere else), and the iRig MIC Field was $99 everywhere I checked.  I suppose $180 might be a little steep for some budgets, but they allow you to amplify the already stellar capabilities of the iPhone 6+ with these simple and intuitive attachments.

I’ll let you know how it goes…as is sometimes the case operator misuse or lack-of-use can be the downfall of many a top device configuration.