Back at the end of the last decade, my initial search for a quality mobile recording device resulted in my purchase of the Zoom H4.  I loved that thing.  I’m sure many still use it.  It had some mic emulation modules that I thought were pretty cool.

Of course, that was before Android, and iPhone, and iPad.  Before twisted wave
and Audio Evolution…before any attachments made by Tascam or Rode or iAudioInterface or iRig.  The Zoom was there with an elegant solution for recording under a blanket in the motel room.

But when the H4n came along…well…it was even more cool…a vast improvement on the H4. I can’t tell you how many times that device saved my bacon (bacon!) in a pinch.

How could I resist?

The H6n is another evolutionary leap forward in hand-held mobile recording devices, and in my book, the Zoom (a Tokyo-based company) still leads the pack in technology in this category.

I’ve been meaning to write this blog for many weeks, and finally got around to completing all the components of the review that do it justice. Let’s begin with a video I recorded that shows you how all those mic modules fit with the main unit.

In that video, I didn’t even mention the hi-resolution color display screen on the H6n.  VERY nice.  It offers digital VU meters for all 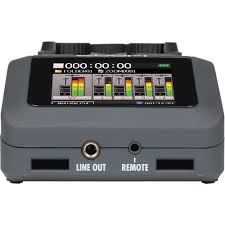 your tracks, plus info on which folder the recording is in, time display, whether you’re using .wav or .mp3, mono v. stereo, and other info.

The unit itself is solid, heavy, and of a high refinement of assembly.  All the buttons and movable pieces work in silence, and with a nice fit.

Now, as promised, a set of four brief SoundCloud recordings seen below.

A couple of notes for those of you who really care about this stuff (and you probably should):

Here are the 4 comparison recordings…. then see if you agree with me about which one sounds best at the bottom of this blog:

In my opinion, the shotgun (I refer to as a “boom” mic — old lingo) is by far the best sound.  That, plus the fact that it required the least tweaking in post makes it the winner for me.

You get a nice hard plastic carrying case with the unit.  The H6n does not connect to Wi-Fi.  I exported the sound by removing the SD card and plugging it into my computer SD slot, and copying over the soundfiles.

That’s about it.  I love this device. Yes, the iPhone and iPad and Android devices are nice, and being able to edit on them too is a plus, but for sheer fidelity, Zoom was and still is my choice for recording on the road.