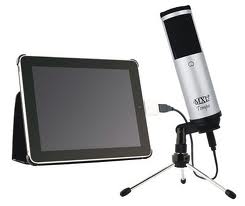 Voice Acting is apparently not big enough to prompt equipment makers to hold their own convention just for us (YET)…but NAMM comes close.

NAMM originally stood for North American Music Merchants, but now it’s an international show for manufacturers, affiliates, resellers, and other vendors in the world of audio.

On the heels of CES in Las Vegas, NAMM was held this year in Anaheim, CA, and broke previous records for attendance.

If you saw my quick review of the new Blue Microphones at CES, well, NAMM is that…on steroids… times ten.

Apparently USB mics continue to be the darling of any recording set — vocals, voice-overs, or musical instruments.  Most audio engineers agree it’s not

possible to get the same high quality fidelity from a USB microphone as you can with a XLR input, but that isn’t keeping manufacturers from trying.  That’s mostly driven by the insane pace of iPhone and iPad sales, and the realization that these devices can actually serve as excellent portable/mobile recorders.

At CES and NAMM, many of the name mic vendors bring their prototypes to show off, and then make vague promises that they’ll be on shelves “mid spring”, or “sometime in March or April”, or “just before Summer”…as was the case with the 3 new “Blue” mics I reviewed.

he mic pictured above, though — the MXL Tempo — is available now.  You can even get it in red and black, and it’s being priced all over the place at $59.   MXL also touts it’s iPad-compatible TRIO USB mic.

There are others, of course.

The iRig MIC Cast Mobile Microphone is a nice unit, but plugs into the earphone jack of your iOS device…not the 30-pin connector.

Finally, the Editors Keys SL150 USB mic comes with a kit that lets you plug right into your iPad for recording.

So many choices!  So little budget!  It almost makes you wanna hope for a road trip just to justify the expense of a USB/iPad mic to your better half!