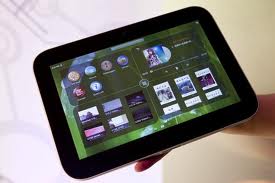 Tablets are a game changer.

Sure, your iPad is handy for swiping through copy as you read…easy to catch up on email while waiting at the doctor’s office…but tablet computers are about to explode on the scene in ways you didn’t expect, and the jury’s still out on how that effects the business of voice-acting.

Yes, Apple’s iPad is still King, and coming out soon with a Prince of a smaller pad with a 7″-screen and at the $200 price-point that made the Amazon Kindle FIRE such a hit.  Add to that a plethora of Android-powered devices from Asus, Acer, Samsung, HTC, Sony, Fujitsu, Lenovo and others… and you’re onto some serious competition.

But wait…there’s more!  Google will soon launch it’s own mid-size tablet the the Google name on it, called the NEXUS, and early reviews are glowing…like…really good!…also around $200.

I’ve also come across some recent deep research that shows how consumers are changing their behaviors due to the increasing penetration of tablet computing in our culture.

Here are some key points:

People primarily use their tablets for consuming content. (in order)

Tablet Users are trending older and more evenly distributed between the genders.

Android device penetration is now even with iOS

More and more users are showing Cross-Platform tendencies 85% on 2 screens at once, 66% on 3 screens

ALL THIS IS CREATING A HUGE NEW MARKET FOR CONTENT…ESPECIALLY SHORT-FORM NEWS & ENTERTAINMENT VIDEOS…61% of tablet owners PURCHASED content on their tablet…and the top 3 areas are entertainment, sports, and weather.  (see http://www.online-publishers.org for data)

What’s your takeaway as a voice-actor?   Indicators are that it bodes well for us.

The demand for more content invariably leads to more need for the human voice in different delivery streams.  It’s still the unsynthesized human voice that brings the best emotions out of consumers when it comes to ads, content, entertainment, information, sports and weather.

Just be ready for the agent, client, or company to say: “…we’re putting together this program for our customers on the iPad, and…”