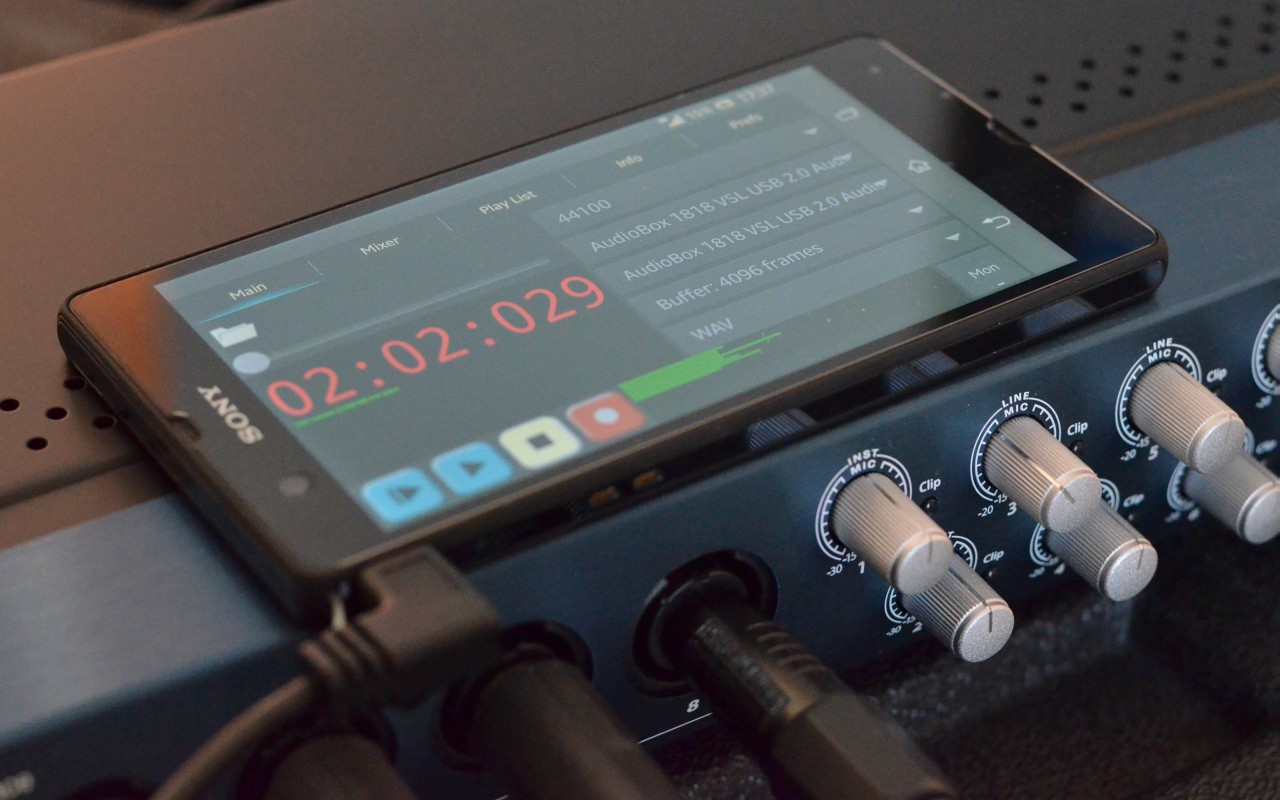 Until recently, iOS devices (iPhone and iPad) enjoyed a monopoly on mobile recording software and hardware solutions for voice-actors.  I’ve written numerous times on the latest gizmos to come down the pike, and the apps that attend to them.

However, with a rise in the strength of the Android open-source platform in smartphones and tablets in the last year, there’s been plenty of clamoring for a similar mobile-recording solution for voice-actors in that realm.  Nothing more than the most rudimentary voice recorders were available….until now.

A software engineer from the Netherlands — Davy Wentzler — has, by far, the most sophisticated and robust mobile recording solution for

I want to acknowledge the help of voice-actor Don Brookshire in leading me to the water on this Android development.  He also clued me in to an essential — but inexpensive — link in the chain to getting both these apps to work with my Motorola XOOM and my Google Nexus 7 tablets:  the OTG cable (on the go).  With it, I’ve been able to successfully record on both devices with my Blue Spark Digital, the Blue Yeti Pro, as well as just about any USB or XLR mic with the right connector. (see compatibility devices list here:  http://www.extreamsd.com/USBAudioRecorderPRO/)

Don previewed the apps at FaffCamp in a lightning round, and let’s not forget to mention that Cliff Zellman of Dallas Voice Actor Meet-up group

fame (and an audio engineering ace) has been touting USB Audio Recorder PRO, and Audio Evolution from practically it’s first iteration on the market.

In just the last few weeks, Wentzler has been issuing incremental new releases and improvements to this product, and I am confident in highly recommending his apps to you for use in your Android-OS devices.  It’s pretty awesome.

Below, please read my Q & A with Wentzler, and then watch for a side-by-side comparison of a USB Audio Recorder PRO recording next to my standard studio audio chain.  That’s coming up as soon as I find the time to eat, sleep, kiss my wife, and other essentials of life.  🙂

My profession is software engineering, I play electric guitar and keys and have a high interest in the technical side of audio. Those elements combined resulted in several pieces of audio software and recently in audio/music app development.

About one and a half year ago I started porting my Windows and Mac DAW ‘Audio Evolution’ to Android. I had a basic HTC Desire phone and was curious what audio software was available for Android. It was very disappointing! There were some good stereo recorders available, but hardly any serious multitrack audio software. I started investigating why and found out that the Android audio system was pretty weak: latency issues, lack of control, no synchronous playback and recording, not even input gain control! But I had this DAW software on the shelf that had too much competition on the popular and saturated platforms, so I thought I’d try my luck on Android and fill in the gap that was clearly there. Of course I knew beforehand that this never was going to be ideal with the aforementioned problems, but there was a slight hope that the problems would be resolved by Google by the time porting was finished. Unfortunately that was and is still not the case, so I am just trying to make the best out of it.

Definitely. I could find lots of posts in forums about it and it was clear that iOS had lots of these apps which are very popular.

The goal for Audio Evolution Mobile was to provide the best possible multitrack audio software available on Android. A half year after the release in March 2012, I found out that there was a way to access USB devices under certain conditions. Since I wrote many PCI audio card drivers before (Envy24/Envy24HT, HD audio and so on), I was pretty sure I could do a USB audio driver as well. It would be ideal, since it would bypass the complete Android audio system with all its bad and depressing limitations. The only difficulty was that this was not going to be part of the kernel or running in any real-time thread as is usual on a Linux system. After some months of development, USB Audio Recorder PRO was born: a basic recording and playback app which makes use of USB audio interfaces. Finally, people could record audio in high quality on their Android devices! Soon, over one hundred compatible audio devices were reported.

Actually, USB Audio Recorder PRO was a spin-off project of getting the USB audio code into Audio Evolution Mobile, since that was the ultimate goal. However, I thought it would be good to have a separate app for people not needing multitrack recording and I could get a lot of feedback out of it.

Both apps have a 4.5 out of 5 stars rating, so a lot of people are happy with it. Over 15000 apps were sold in a year, so there is quite some demand. I get questions and feature requests about every day and many people have been waiting for the USB audio integration in Audio Evolution Mobile.

To be honest, I hadn’t thought of this group. I was primarily aiming at musicians, DJ’s and perhaps field engineers. It is nice to see that the app has uses for other groups as well.

Not much to be honest, but I’m all open for it. Anyone can just drop me an email for enhancement requests or bug reports.

Kindly send us suggestions and bug reports and help spread the word!

As of today, Audio Evolution Mobile 1.8.0 was released, which includes a public beta version of the support for USB audio interfaces. It is fully functional, but I call it a beta because during testing, some limitations like not being able to record and playback simultaneously in 24-bit surfaced for certain Android devices. Before I am going to start promoting it actively, I would like to have a clear understanding of what each family of Android devices can handle. For that I need user input since there are over 2000 different Android devices around and I cannot purchase them all!

Luckily all seems to be ok for popular devices like the Galaxy S3, S4 and Sony XPeria S and Z, but unfortunately the Nexus 7 is one such device that only seems to do 16-bit full duplex at the moment. Still I think it is a giant step forward compared to the limited Android audio system.

Further plans include new graphics, easier cross-fading, improved editing and perhaps MIDI and virtual instrument support. As usual, I am updating these apps once every couple of weeks with new features and bug fixes.

[Davy Wentzler is 38, born in The Netherlands and lives there with his wife near Rotterdam, no kids. He studied Computer Science at the Leiden University and after years of designing and writing medical software, he recently set up the company eXtream Software Development.]