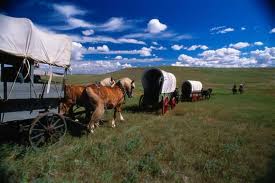 …and that’s really the best way to think about it…as a frontier.  Full of opportunity, but harsh and unforgiving territory that can punish and leave you empty.

I’m enthusiastic about the start-ups that blaze new paths in the frontier.  Early on, I was a big supporter of CinchCast when it came out(see my blog from Dec 2010)…a way to be heard on Social Media with the use of a special app/website.

So to is Ping and Amplify…while not audio programs, they were Social Media tools I had come to rely on.

Still chugging along is ChirBit. It’s not only survived but seems to be thriving.  Very nice interface for uploading sound files, and now has (like every other site) a social media component for following, commenting, connecting, etc.

TweetMic came and went… and came back again.  That’s a free iOS app that lets you broadcast short audio blurbs on Twitter.

See?  A Frontier for sure.

In the mix are a wagon-train of new VO websites:  AllStarVoices, VoiceOverCity,  and VoiceAndStudio are worthy and professional recent sites that showed up on my radar in the last year.

Now, two more to add to the mix.

Their site lays it out plainly:

You get the feeling from this site that it’s for people wanting screenplays read for samples… but then there’s that link saying:  Become a ReadThrough Voice Actor!… and sure enough, there’s a sign-up form to get your voice heard.

The other site that’s been garnering attention is AudioCatch. I have less of a good feeling about this site, only because I’ve seen the comments on FaceBook threads about it, and they have not been complimentary.  I have not tried-out this service, but I mention it here, ’cause different people take advantage of different services in different ways, and for some it may be productive.  The site is slick, and purports to put together voice seekers and voice talent (sound familiar?).  I saw jobs listed in value from $30 to $1500…so have at it!