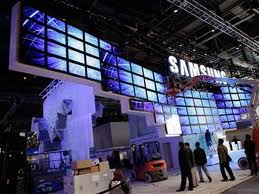 My total time at CES this week was 4 hours one morning…maybe more like 3 hours and 25 mins.  That may sound like a lot, but time goes like:

(I think you get the idea).

The microcosm of the Exhibit Floor is like a futuristic city of commerce with all the finest in hucksterism, sales, presentation, hype, sex appeal, and product that you can stomach…and thousands of people — like ants — bustling around like they know where they’re going, and they have something important to do….most of them on their smart phone trying to text or call someone, and finding it pretty hard, ’cause there aren’t enough cell phone towers in the USA to handle all that concentration of traffic in one place.

I put together a little video of a few shots I took while I was there to give you a flavor of the scene.  Its only 1:10.  Check it out, and then I have some unexpected meet-ups with VO people to tell you about.

You saw my story about the Blue Microphones yesterday…after visiting that booth, I wandered.  I had no plan of where to go next, and at CES, that’s bad; you can get lost.  From the cavernous South Hall, I meandered my way to the behemoth Main Exhibit Hall where the Microsofts, the Sonys, the LG’s, and the Panasonics hang out.

A Voice actor named Christopher Flockton had briefly written me on FaceBook that he was working the Haier booth next to Panasonic, and I should stop by if I had the time.  Christopher

turned out to be a wonderful conversation.  He was actually working as a spokesman for Haier.  These are good gigs to get as an actor…they pay well, but you’re exhausted by the end of the day.  Christopher had memorized the schpeel for his presentation…which he had to deliver several times during the day.  I’ve done similar work at NAB before with an ear-prompter for presentations, but I actually think memorization is easier.

I had barely said goodbye to Christopher…and walked about 50 yards, when I bumped into Steve Savanyu who (among other things) is the Director of Educational

Services for Audio Technica.  I’d first met Steve at VOICE 2010.  He’s a technical whiz, and audio expert, who can quickly get you lost in hi-fi verbiage that maybe only George Whittam and Nikolia Tesla can understand.

In my mind, running into John P (yesterday’s blog), Christopher, and then Steve in an exhibit hall PACKED with thousands was not only beyond coincidental, but underscored for me the place audio and especially VOICE has in the consumer world of  hi-tech.  We matter as a profession, and as a force within the world of entertainment, advertising, elearning, publishing, and on and on and on.

And THAT quickly… 3.5 hours was gone!  On my way out, I stopped by the TwiT.tv location in the main hall.

The set-up was a veritable audio/video delight…mics and cameras everywhere.  And there was the man himself:  Leo LaPorte just ambling about

talking to people.  In Las Vegas, some people call me a celebrity, but to me Leo LaPorte is a celebrity.  So, yes, I was shocked when Leo called me by my first name and started a friendly conversation.

‘Turns out he watches me when he’s in town.  I am so grateful for my life…it’s  not all good, but parts of it are amazing.

Thanks for taking the time to read about my wanderings at CES2012.