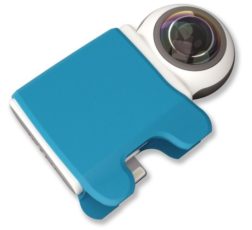 For two years or more, I’ve been beating the drum about the use of pictures; still pictures, moving pictures, pictures on social media, and pictures in your marketing.

It’s easy for us in the business of audio to overlook the important of video…but it’s hot.  Red hot.

Don’t believe video is hot?  Check out this infographic.  It’ll convince you.

If I had any sense, I would’ve recorded this blog as a vlog instead.  So…see?  Even for someone like me who is committed to the idea and the wisdom of using video (and who makes a living on camera in another job)…even for me…incorporating video into everything is a big challenge.

But if you ARE of a mind to use video a little more liberally in your marketing, you might wanna consider a unit like the Zoom Q2n (see my blog about it here).

If you really wanna just jump to the very trendiest of trends in this realm…you might wanna check out the Giroptic iO 360° cam for your iPhone.

The Giroptic iO fits right onto your iPhone device, and shoots video or photos in 360.  It comes with an app, but works with your 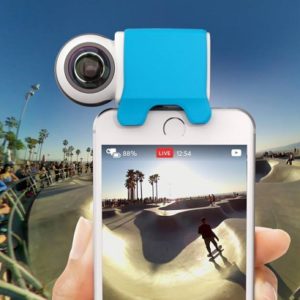 other video/photo apps, as well.  Oh, and it records audio too!

Go figure…all the filters, and apps, and attachments, and editing you can do a bazillion different ways on your smartphone anymore, and someone came up with yet another angle.

360-pictures is the hot  new thing.  Don’t believe me? Go ahead…Google it.  Much of this trend is being spurred on by the incoming juggernaut called Virtual Reality.

Check out the Giroptic iO website for all the tech specs.  I haven’t seen it for sale anywhere for less that $250…and that’s no small detail… but then again if you MUST be cutting edge…well….

Here’s a competing model on Amazon for $200.  I’m not endorsing either device.  Just saying…video is hot, and it’s not going to stop here or there or anywhere for you to get on board.

Ya gotta run after that train, and jump on to make it to the next stop in this digital revolution.  I remember my TEENAGE daughters telling me they’d never be interested in Twitter…now they’re all doing it.  Trust me.  If not the Giroptic iO, you’ll wanna maybe grab the next thing coming down the pike, but don’t be the last voice-actor to join the video revolution… it’s movin’ on!