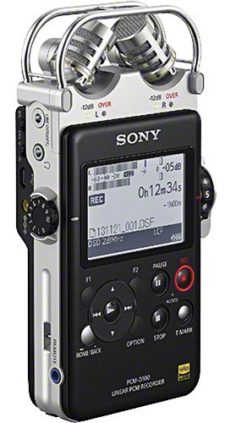 They just keep on coming down the pike, and I am intrigued by all of ’em.  How much can they pack into a hand-held digital recorder?

Tascam and Zoom seem to dominate this field, but others players like Olympus and Roland have some entries.

Now, Sony is back with its PCMD 100 Portable High Resolution Audio Recorder.

For what I consider to be the outrageous quoted retail price of $999.99, the PCMD 100 has no phantom-powered XLR jack  for connecting your condenser mic.  Ouch!  (here is a jack for a smaller 3.5mm mic input cable.)

Still, this is an attractive package of features that includes a wireless remote control, a copy of Sony’s Sound Forge Audio Studio LE, and an external speaker built into its front edge.

Some critics (see link below) claim the recording quality matches the Zoom H6n (my pick in this category), and the custom, positional electric mics record Direct Stream Digital audio, and are protected by attractively-designed roll bars.

From article linked below:  “For those unfamiliar with DSD, this is an alternative method of sampling which uses one bit, instead of the familiar 16, 20 or 24 used for PCM recording, but samples much more frequently; that frequency here is 2.8MHz — 64 times that of a 44.1kHz audio CD. DSD recording is reckoned by some to get closer to emulating an analogue waveform than standard PCM recording, and is often preferred as an archive format, although there’s still debate about which is better.” 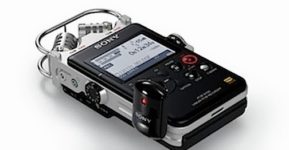 The PCMD 100 is more compact than the H6n, and the screen is said to be very distinct (I have not held one of these in my hands, yet).

There’s a MassDrop promotion going on right now for the PCMD 100.  With the right number of participants, the price approaches $700.  Most online retailers like B&H or Amazon have it for more in the $750 price range…which is a darn site better than $1k, but still expensive for my blood.

Click here to read a soundonsound.com article on the Sony PCMD 100.

This might just be the ticket for people seeking a hassle-free DSD recorder.