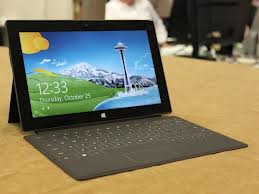 In the exploding tablet wars, one new entry stands out…and it’s from a familiar name:  Microsoft.

The global computing giant made it’s fortune on software…not hardware.  The most serious hardware offering it had heretofore was a series of keyboards, mice, and webcams.

Ive had the chance to put this tablet through its paces.  As context, I also own an iPad, and an Android Tablet, and well…you know me…I’m a geek who gets off on this stuff, so I think I have a pretty fair foundation to comment.

In a word:  AWESOME.

In fact, our Manager of Digital Media here at the TV station — who is even more of a gadget guy than I am (if that’s possible), spent a half-hour with the Surface, and said he was sorry he bought the newest version of the iPad.  He was that impressed.

There are a TON of reviews of the Surface, so I won’t try to add to the chatter, but let me give you a few hilites from a voice-actor’s POV.

Negatives:
No question the Achilles heel of this device is a deficient universe of available apps.  This is growing by the day, but some things you’d expect just aren’t there yet.  DropBox for one.  However, it does have the full Microsoft Office Suite as part of the package…and not just an evaluation copy:  Word, Excel, PowerPoint, and OneNote.  Fully functional.  Also, since Microsoft owns Skype, the Surface has the most advanced version of this program…it’s a pleasure to use… and works flawlessly.

This tablet — like no other I’ve seen — approximates a laptop.  The touch keyboard even comes with a built-in mousepad, so you can touch the screen, or use the mouse.  Also, with one touch, you can get to what looks for all the world like a Win7 desktop screen.

One other note, sadly, is an absolute absence of any available (decent) recording or editing software (DAW).  There are some rudimentary voice-recording apps…but this void is a drawback for voice-actors using the Surface as a mobile recording device, and especially frustrating in light of the possibilities afforded by the external USB port.

Remember, though…anything you can call up on the internet, you can utilize as a web-app on the internet.  I have yet to explore those options.  Some downloadable Windows programs are not compatible with the ARM processor/Win8 OS available on the Surface.

Final word:  A delight for everyday use.  Perfect for browsing and use as a resource and reading device in  your studio, but a failure as a mobile recording device (so far).