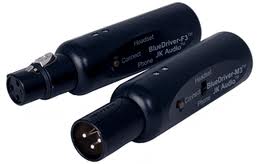 JK has a fine reputation for all sorts of audio interfaces, things like phone patch devices, wireless headsets, and products for intergrating broadcast, film, and telephone communications.

The BlueDriver comes in a female or male XLR configuration.

The female version fits onto a microphone for sending and pairing with a sound card, phone, headset or really anything equipped with a BlueTooth receiver.  The website states:  “…the 3.5 mm stereo jack contains a mic level output suitable for recording, with the clean mic signal on the left channel and the Bluetooth return on the right…” (comes in 3 or 5-pin model)

The male version would plug into the mic input of a mixer or receiving and pairing with microphone, BT-equipped phone or other device. The JK Audio site says:  “…the 3.5 mm stereo jack contains a mic level output suitable for recording, with the clean mic signal on the left channel and the Bluetooth return on the right…”  (also comes in 3 or 5-pin model).

Ostensibly, you could buy both, and have the ultimate BlueTooth connection, but that’d be pricey…as JK Audio has it listed at $249 each, but you can pick it up on BSW and other sites (B&H, Full Compass, etc) for around $236.

By comparison, the Centrance MicPortPro sells for ~$150 and is not wireless, but converts any XLR mic output to a USB connection.  So these are two different animals save the fact that they have the same form factor, and they serve to translate a standard mic signal to another output.

Have you tried the BlueDriver?  I have not, but would love to know how good the signal quality is.

My thanks to voice actor David Sigmon for the tip that led to this blog article.

Below is a quick product demonstration by a BSW rep.