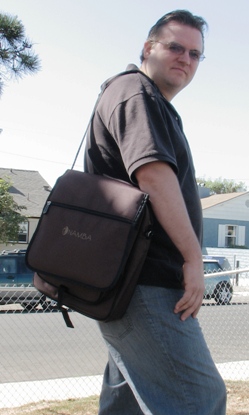 After a long day trolling the exhibit aisles at NAB (Nat’l Assoc of Broadcasters) in Las Vegas, George Whittam shows up at my TV station promptly as my 5 o’clock evening newscast begins.  Great!

He’s got with him a sharkfin-shaped, zippered nylon carry-bag, and I KNOW it’s the Harlan Hogan Porta-Booth Pro.  George confirms that, yes, he’d seen Harlan the day before at the convention, and Harlan insisted George take it for a test spin at home in his studio.

Determined to hold my focus for the rest of the half-hour’s newscast, I then gave George the nickel tour of the CBS affiliated station, and we settled into the news conference room where CNN had provided pizza for the news staff (not sure why).  There, I video’d George in an impromptu set-up of the Porta-Booth Pro.

It’s simple, intuitive, and obviously well-designed and made of quality materials.  When assembled, it shows an integrity of construction, and some nice little features that make it a cinch for an on-the-road voice actor.

Watch the video of George below (roughly 4:30), and pay special attention to a nice “insider” tip for your traveling voice talent types.

By the way, George spent the day at NAB talking to various vendors about the possibility of getting their participation in the Don LaFontaine Voice Over Lab at the SAG Actors Center.  Most, he said, had good interest in being a prt.

George plans to bring the Porta-Booth Pro to VOICE2010 for anyone to take a look.