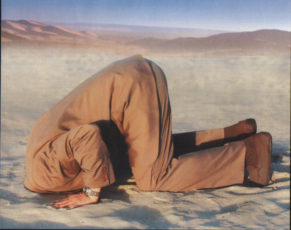 Cultural observers would have you believe this country represents two irretrievable, polarized positions.  Red or Blue.  Yin or Yang.  Conservative or Liberal.  Of course, it’s not that easy…nor so clearly defined.

The analysis rarely moves beyond this myopia.  Which is a shame.  Obviously there is a wide and deep spectrum of positions. But only the loudest advocates for the most extreme views get the coverage.  You can blame that on a popular media infatuated with sensationalism.

If you’re at all plugged-into the development of an emerging mindset in our our Voice-Over community, you could easily see an analogy over the issue of rates.

On the one side, there’s the ostrich…an animal jokingly referred to as having its head in the sand, refusing to see all that’s going on around him, and maybe preferring not to.  On the other side, the cunning Coyote…agile in changing surroundings, adept in the  midst of a developing environment.

Which are you when it comes to the issue of VO compensation?  Stubbornly refusing to see the changing times?…or quick to adapt to a new digital world?

Well, you don’t have to be either.  Remember you are a freelancer who owns your own business, and you can choose where you belong in the animal kingdom.  Maybe you’re a shark…a virus…a horse…or a dachshund.

I’m not going to go too far with this analogy…most such comparisons fail at some point.

So should voice-actors decide whether to accept what appears to be “creative” (agile?) rates from numerous freelance jobber sites, or hold out for legacy-level premium pay?  There are passionate arguments for both, and they’ve been articulated again and again in the online forums.  Obviously, there’s a spectrum in THIS debate too.  You don’t have to be an Ostrich or a Coyote.

And then, there’s the argument that says you don’t belong anywhere in that realm; there is yet another perspective. Los Angeles-based Voice Actor Christian Lanz had one of the most erudite observations about this whole conundrum that I’ve yet seen.  He’s given me permission to post it here verbatim:

Sites like Fiverr are what we get when we allow the propagation of the erroneous and rather absurd notion that everyone is entitled to a professional VO career.

I’d love to play professional tennis, but I’m not remotely good enough. My options therefore are to train until I am, or to seek an alternate career path more in tune with my own particular talents and abilities.   What I don’t do is beg people to watch me play mediocre tennis for five bucks.

Voiceover (or any other profession) should be no different.

Chew on that one for a while…whether your head’s in the sand, or you’re part of the coyote pack.