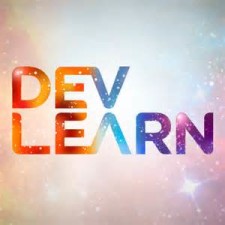 Las Vegas hosts a never-ending, multi-layered parade of conferences and conventions.  It’s the #1 gathering place for such things, and the city obliges with it’s own ginormous convention center.  Beyond that, most all the resorts have their own convention facilities…some of them bigger than those you’d find in most cities.

As conventions go, DevLearn barely got noticed by Las Vegas.  The ELearningGuild event brings in an eclectic, specialized type of attendee, and this year they met at the MGM.  Compared to NAB, CES, and SEMA the DevLearn conference probably made only a small blip on the local economy (the measure by which most of these events are measured). 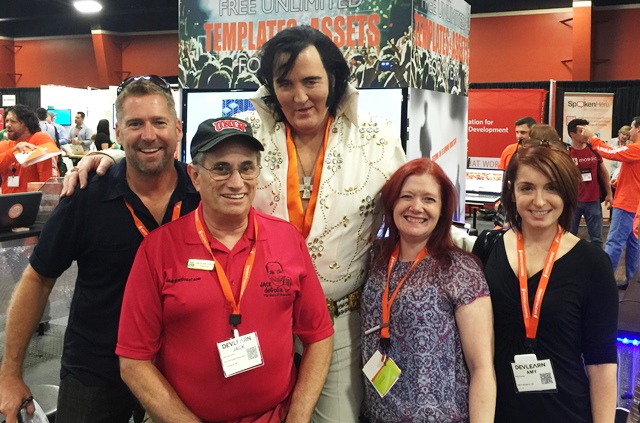 But for voice-actors, DevLearn (eLearning) is a fertile field for mining prospects, making contacts, and networking for relationships.  WoVO took a shot at making a formal presentation at the event, but was turned-down.

The eLearning sector is burgeoning, and opportunities abound for the enterprising voiceover talent who can find a corporate or instructional design producer willing to “go pro”…instead of hiring someone in their own office.

An expectant and hopeful group of voice actors attended this year’s DevLearn.  All were World-Voices Organization members, and they called themselves the “WoVO Swat Team”. I asked one member of the team to summarize this year’s experience in this blog today, and you’ll find that below.

Jack de Golia is a Vegas Voice Actor…active in the community that has grown up around Melissa Moats, and the Voice Actor’s Studio in the suburb of Henderson.  Jack is an excellent audiobook narrator…does character voices, eLearning, and more.  He’s a specialist in Twisted Wave, and shares his wisdom generously in the community.

Below is his thoughts on his experience at DevLearn.

What a difference a year can make.  In 2014, I took my smiling face, logo shirt, and business cards down to DevLearn, the annual fall convention of the Elearning Guild, held each year in Las Vegas.  The event draws thousands of elearning content developers, software creators, and others who sell the widgets and gadgets that people need to create online and computer-based courses.  I got my free pass, which entitled me to roam the exhibit hall to talk to vendors, and waded in.  At lunch time, I staggered out, and ran into two voice-over compatriots. Commiseration was the theme of that lunch.  We each had run into blank looks, people who saw no reason to PAY for voicing their courses (Joe down in the mail room can do it and we’re already paying him), and there was even an exhibitor specializing in low-cost and therefore, low-pay, voice services.

Fast forward to 2015.  First of all, it was time for an organized approach.  Amy Farris, Shelley Avellino, Justin Hibbard and I all learned of our common interest in the DevLearn conference via the Facebook Elearning Narrator and WoVO pages.  All of us are members of WoVO, so a “WoVO Swat Team” seemed like a good way to wade into the fray.

And that expanded what we could each offer from “just my lovely voice” to “If I’m not the right sound for your project, I have colleagues who are…”   We would be able to let elearning pros know how to find voice pros in places like www.voiceover.biz and elearningvoices.com.

But, before going into the exhibit hall, the four of us huddled up on the first day of the conference.  Together we were smarter than any one of us.  Each of us brought something to the team, from how to approach potential clients in a friendly, low-key, effective way, to having done homework that whittled down the list to avoid exhibits from the “tool” side of elearning—those who make platforms and software, but who don’t get involved in production.  That cut out about half of the exhibitors and meant we’d spend our time a lot more efficiently.

We also had mailing labels we could stick on the backs of our business cards that read: “Why use a professional voice?  GO TO: j.mp/elearningVO.”  (This short-URL link takes you to an article about the value of professional voice actors that appeared last spring in “Elearning Industry,” a weekly online newsletter.)

We also split up the room.  There were five major aisles and over 120 exhibitors.  Shelley and I took one side, Justin and Amy split up the other half.  We agreed to meet for lunch and compare notes.

Immediately, we started finding exhibitors who did hire voice actors, who agreed with the idea of paying professional rates for professional work, and who sincerely wanted to know how to find professional voice talent.

We did find one vendor who gets all their voice talent through one talent agency in New York City.  Most however, had no idea where they could find voice talent.  All were glad to know about WoVO’s www.voiceover.biz and elearningvoices.com.

That was this year’s big take-away: most folks in the elearning world have no idea how to find folks in the voice-over world.

Now, to be clear, there were still some in the “Fivver” mindset, but a lot fewer this year.  Plus, that low-cost voice-over vendor was absent from this year’s DevLearn.  One exhibitor did say that using professional talent was now possible because talent costs have come down.  I assumed he was talking about not having to pay union scale as much these days.

The second day, Shelley and I went to a concurrent session, titled “The Accidental Voice Actor: Recording Your Own eLearning Voiceovers.”  Kevin Lange, the presenter, came from radio and now works for American Express.

His approach: there you are in your cubicle with a tight budget and a recognition that voice audio can support and improve the quality of an elearning course.  How do you make that happen?

The goal, he told the session, was to prove the value of voice-over to management and to make the case for a bigger budget so you can hire a pro.  Meantime you get along as best you can.  For Shelley and me, that session was a lesson in walking in another person’s shoes.

Next year?  How to we reach more people at DevLearn?  Ads in the program are expensive ($2800+).  So are banners in the hallways.  Maybe there’s room for a concurrent session on how to find voice talent.  Maybe other WoVO members can attend other Elearning Guild conferences (in 2016: Orlando, Fla., in March; Austin, Texas, in June; plus October again in Las Vegas).  Stay tuned.