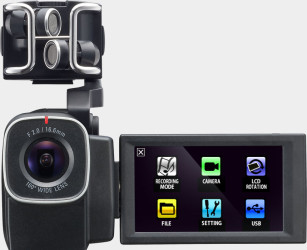 You’ve seen me review other Zoom products on the pages of this blog.

The Zoom H4, Zoom H4n, and Zoom H6n are all part of a parade of Zoom devices I’ve proudly owned.

But remember how I’ve preached about video, video, video?  As further testament, Facebook is not only pushing uploads of native video on their site (vs. linking to YouTube), but they’ve recently announced an initiative to begin revenue sharing of video as an incentive to post more pics on their site.

I know voice-actors are all about AUDIO…but trust me on this:  you must find a way to incorporate pictures (preferably moving pictures) in your online posts, or you will fall behind in your marketing efforts.

In my opinion, the Kodak Zi8 was a first decent attempt to incorporate an audio input with a decent video camera.  It has a

small-plug external mic input, which could be used with any number of available XLR converter plugs, but makes it less than top-quality, and besides, they don’t make it anymore.

The Zoom Q8 changes all that.  Video purists will find ways to pick-apart the video side of this composite device, but for those of us in audio production, there’s much to like about the way the Q8 handles audio. 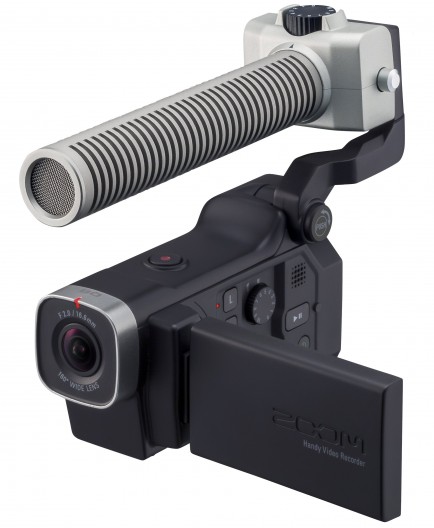 The first thing you notice about the Zoom Q8 is the small size, and the pivoting mic head.  While the mic attachment comes with Zoom’s standard X/Y Stereo mic configuration, that mic is detachable, and

virtually any of the other mics available from Zoom with its H6n are attachable.  I chose to use the shotgun mic attachment in the video comparison I provide below, cause it’s the optional mic returning the best sound in my opinion.

The fold-out video viewer is color and also turns from front-to-back viewing.  There are very few

manual controls or buttons, except the VERY handy manual gain controls for the mic.  Everything else is controlled through the viewer touch screen…and that control is considerable.

From the Zoom specs: “…with support for high-resolution 24-bit/96kHz audio. A low-cut filter and foam windscreen allow you to eliminate low-frequency noise and rumble, and there are three Auto Gain settings, as well as a built-in compressor and limiter. Audio can be recorded along with video, or the Q8 can be used as a standalone stereo or four-channel audio-only recorder…”

Finally, I point out in the video what I believe to be one of the strong-selling points:  the way the camera saves media.  I also talk about what I consider to be the device’s weakest features.  Total time: 4:10