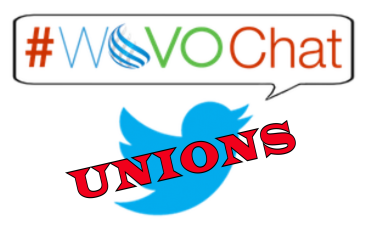 A conversation about the union often rises to the level of rancor usually reserved for Mac v. PC discussions.

For today’s WoVOChat, we’re not going to go there…but it makes you wonder.  Why shouldn’t SAG-AFTRA bring about universal support?  A union should in all aspects be FOR the actor, speak FOR the talent, benefit the career OF the member.  I’m sure the union CLAIMS to do that…so why is there such disagreement about the value of the union in our VO careers?

Well, we hope to dig into that a little, but — with civility.

Our guests don’t claim to be experts, but collectively, they know more about the union than anybody else attending the chat (I’ll wager).  Johnny George has been in the Union for 15 years — most recently as Fi-Core.  And Connie Terwilliger also has a long history with the union.  Both have freely shared their experience on union topics at VO forums and conferences.

I’ll be the host and facilitator for the hour, and WoVO pro & content marketing specialist Pamela Muldoon will moderate.  Muldoon also prepares a Storify record of the session, and compiles Twitter reach metrics after the event.

Below is a list of the ten questions that will form the backbone of our discussion.  To keep things simple, we’re mostly limiting the discussion to SAG-AFTRA.

Hope to see you there!

1)  When in a person’s VO career, should they consider the value of joining the union?

2)  What are some compelling reasons FOR joining the Union?

3)  What are some compelling reasons for NOT joining the union?

4)  What is Fi-Core, or Financial Core?…and why does SAG-AFTRA dislike it so much?

5)  How long can I do union work before I have to join the union?

6)  Can anyone convert non-union work to union using a paymaster?

9)  I live in a Right-to-Work state.  Does that preclude joining the union?

10)  Are we missing any important Union basic rules?