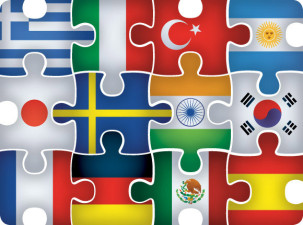 …there’s a new, even more cryptic request showing up in auditions now.

Have you see it too?

I’m talking about the call for voices that was sent back again by the prospective client, ’cause the first round of auditions were too “announcery”.

Fine.  ‘Quite accustomed to seeing THAT.  [See my rants on the subject HERE and HERE.]

But THIS time the directions included:  “We’re also now looking for some African American voices, or ‘ambiguously ethnic‘ voices.

You know what this reminds me of?…an interview I saw with Tom Hanks when his movie “The Terminal” came out.  You’ll remember Hanks played the role of a traveler caught in customs limbo when his fictional Eastern European country collapsed in political chaos, and his character’s nationality came into question.  Hanks explained in an interview that he arrived at the character’s accent by throwing together a polyglot of ethnicities based on a distant foreign relative, combined with a generic “slovakian”-derived speech pattern.

Don’t even get me started about the call for “African-American” voices.  That’s so blatantly racial, or reverse-racial that it blows my mind.  I’m reserving THAT topic for an entire month’s worth of blogs!

So if “announcery” is of the devil, and “conversational” is no longer de rigeur…then is “ambiguously ethnic” our new target as commercial voice-actors?

That direction is so…er….uh…ambiguous…that it leaves no room for definition.  In theory…ANYTHING would meet that standard.  I think I’ll mix a little Costa Rican Spanish with some Irish, and add a Pakistani flourish.  Yeah!  THAT should do it.

Will somebody please comment back what “ambiguously ethnic” accent worked for them on these audition calls, and at least we’ll have an idea of what to shoot for?

Thanks in advance for your time in tolerating my rant.  🙂