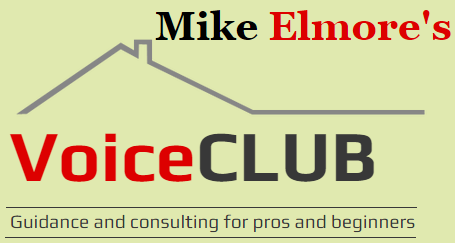 A few weeks back, Mike Elmore asked me to be featured in his series of recorded interviews called VO Stars.

I told him he was talking to the wrong guy.  I mean, it’s flattering, but…really?  Well, after a little cajoling, I agreed to chat with Mike about my experience as a voice talent, my book, social media, marketing, and some of the realities of being a voice actor for those up ‘n’ coming hopefuls.

Mike — like many of us — was a broadcaster in a previous life, and his questions were better than my answers.  It was Mike’s chance to

turn the tables on me.  I had interviewed Elmore in a similar situation in 2013 for a blog article about his coaching in “Voices for All”  You can read about it, and watch the interview here.

Usually Mike conducts these shows in a “live” environment, but because of my crazy late schedule on the West Coast, we agreed to record it.

Well, now it’s going to appear on his “VoiceClub” site, and you can listen to it Tuesday 1-20-15 from 8:30-9:30 Eastern.
Click HERE to see the VO Stars write-up, and get the conference call number.

I hope you enjoy our chat.  Thanks, Mike!