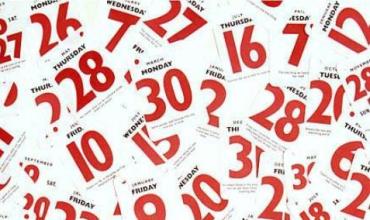 Why do the days seem to drag by, but the years FLY by?

December 1st of any year is usually a reality check or a time to panic, unless you’re an incredibly pragmatic planner.  About this time two years ago, I wrote a blog called: YOUR JANUARY PLANNER: a list of things to consider for your voice-over business in the new year.  The checklist is still applicable, and I suggest you peruse it for some possible ideas.

Freelance voice work requires intense personal discipline.  Translated, that means in feast or famine you’ve gotta maintain a work ethic that amounts to putting one foot in front of the other and doing what needs to be done.  That assumes you HAVE a plan and goals, and know how to break it down into smaller, chewable bites that lead to the desired end result.

My point in this rather elementary primer is that December presents an entire echelon of discipline challenge ON TOP OF the usual roadblocks that come your way in a normal month.  Even if you were a monk, living in a cave, you would still experience the congestion of December for your weekly trip into town for supplies.

listen to ‘Change Your Mental VO Calendar’ on audioBoom

December means extra duties (shopping, wrapping, decorating, parties) not typical for the other 11 months, AND carries with it this sense of doom that THE  NEXT YEAR is just around the corner, and that fact alone can become a huge mental mountain in your mind.

Regardless of the fact that the world still turns, and the sun comes up in the East on January 1st just like it did on December 31st, the new year seems to carry an onus that demands we wrap things up in the old year, and make resolutions for the new year.

I like that we’re presented with the turning point: a sort of dividing line that makes us think in terms of renewal, but you can’t let it freak you out.  Other than some tax deadlines, there is probably no one thing that really changes for you in your VO business from 2014 to 2015.

It shouldn’t be a sense of doom that associates with the new year, it should be excitement!

In just the last week, I’ve been asked to participate in, or help plan 3 different VO workshops for the new year.  This is prompting me to eschew the old mental image I have of the year, and embrace a new one.  So my VO calendar is no longer one that comes to a stop on December 31st and begins anew on January 1st…instead it’s a running, constantly renewing, always updating parade of months…and every once in a while, the numbers on the year change.

Is that a useful model for you too?

Maybe it’ll make the days fly by, and the years slow down a little.  🙂