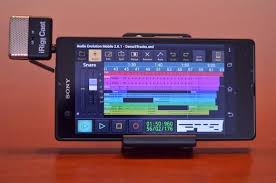 Eagerly, I opened a link the other day promising a list of the “five best voice-recording apps available for Android”.

I just knew with a title like that, my favorites — certainly Audio Evolution — would be in the list.  To my dismay, the author for this TechRepublic article was thinking more “voice memo” app, than professional recording app.  The list included:

While all of the above are handy for quick recording and sharing to social media, none of these apps are ready for the rigors of voice-acting.

Here’s the article: Five of the best voice recording apps available for Android

The Android platform was the johnny-come-lately to the professional recording mobile app compared to the early successes of iOS on iPhone and iPad.

[caveat: most audio experts will explain to you that while such mobile recording apps on Android and iOS have come a long way, and are of passable quality in a pinch, they so far do not match the fidelity of a standard studio or mobile audio chain]

But my most accounts, the Android OS has well-surpassed iOS in units sold globally, especially in the smartphone market.  More and more people are seeking a quality recording technique on their smartphones and tablets, and who knows?…maybe the above caveat will no longer hold.  That’s why it may be worth it for you Android OS device owners who are voice-actors to consider:

The first two on that list are offered by the same company, and are similar.  Audio Evolution is the most advanced of the two, but you may like the ease-of-use of the USB Audio Recorder Pro.  Noted audio engineer Cliff Zellman claims Audio Evolution is like ProTools for Android… and has proven that to more than a few skeptics.

WavePad is also no slouch of a professional recording app.  With the right translation device (Centrance MicPortPro, pre-amp, and ToGo cable), any of your favorite XLR mics will work in this setup.

I’ve written extensively on this previously.  You may be helped by reviewing these articles:

Your Next Smartphone Purchase: A VO Necessity?