The Value of Chutzpah 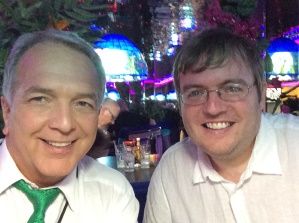 Not the DAW software… rather “chutzpah” is a Yiddish word meaning audacity — exhibiting gall, backbone, and spine.

Chutzpah is pronounced with a little bit of phlegm from the back of the throat off the top, followed by the “U” sound from a word like “good”,  and that first syllable ends with a hard “t”.  The word finishes on the second syllable with the traditional pronunciation of “spa”, like the heated pool with jets. Accent on the first syllable.

Go ahead, you can say it…and at some point you should incorporate a little chutzpah in your life.

George Whittam was in town last night.  He’s been exercising a little chutzpah, and it’s changed his life mostly for the better. Over dinner at my favorite Las Vegas Diner — The Peppermill — we never stopped talking.  I’m not going to give away any personal secrets, but suffice it to say that Whittam is a lesson in seizing the moment that best benefits his business, his family, and his future.

We all know that George is everybody’s favorite audio engineer.  He has a degree in it.  Don LaFontaine, Joe Cipriano, Beau Weaver and countless other VO luminaries have depended on his electronic excellence.  Yet, until a recent partnership with Edge Studio presented itself…life and business was not a cakewalk.  He explained to me that like most of us, he was seeking that balance of challenge, compensation, fulfillment, and consideration of family.  He showed a little chutzpah at the right life moment, and now things are falling into place much better.

It does to me.  I even blogged about it August of last year: 5 Clues Your “Persistence” is Really Pigheadedness.

Being pigheaded, though, is the negative flip side of the Chutzpah coin.  Either could achieve the same end, but stubborn is not being forthright…it’s not being audacious or having spine.  Chutzpah reeks of taking a little bit of risk, because you have a lot of reason to believe you’re ultimately doing the right thing.

If you aren’t sensibly seeking to exercise a little chutzpah in your business plan, you are probably missing opportunities, or at least missing the chance to learn a lesson of failure that will then take you to the next level.